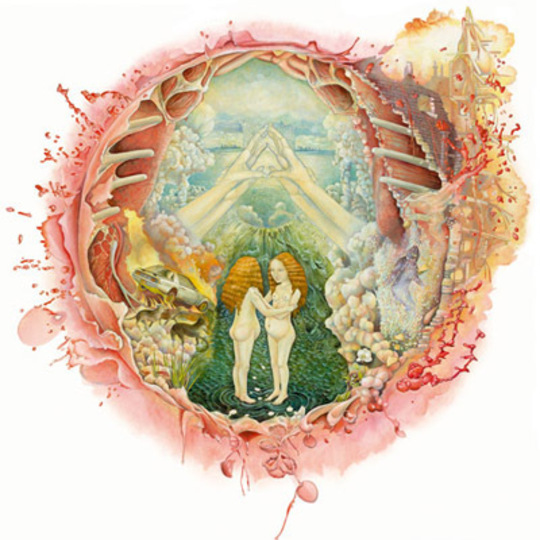 Emerging from the ashes of The Unicorns in 2006, Islands’ calling card arrived in the shape of Return To The Sea, a first offering brimming with hooks, intrigue and sunny melodies. Featuring guest players from Canadian indie royalty Arcade Fire and Wolf Parade, a fantastic debut it was – peppered with sly humour, graced with longevity and marked by an adventurous, playful approach. Since then co-founding member Jamie Thompson (aka J’aime Tambeur) has departed leaving Aaron Harris to take the reins behind the drum-kit, the band now standing at a sextet. So what's changed? Well, Arm’s Way is an expansive piece of work: long (68 minutes), loud, and menacing, it sounds both pointedly different to Return… and at odds with anything 2008 has offered thus far.

The band set their stall with ‘The Arm’. An introductory clatter of swelling strings, dappled cymbals and cocksure yelp from Nick Thorburn precedes his forewarning “Breathe in deep…” – good advice indeed, as what ensues is hard to fathom in one sitting. Sweeping violins combine with a powerful, strident guitar lick that billows proceedings in dramatic (and yes, breathtaking) fashion. Strings flutter in graceful downward spirals, ivories are tinkled in breaks between the recurring central motif and Thorburn’s vocals are relayed in a none-more-forthright manner. Immediately there is a level of focus – of sheer ambition – on display that shadows anything on Return To The Sea, and the band's ability to maintain this throughout is nothing short of astonishing.

A different proposition from its precursor – and the scattershot brilliance of The Unicorns’ Who Will Cut Our Hair When We’re Gone? that endeared it to so many – Arm’s Way is by no means an easy listen, though on the same note it’s not a ‘difficult’ album either. The tone is almost unremittingly dark – at some points bordering on the terrifying, Thorburn seemingly delving deep into the seamiest corners of his subconscious for inspiration. The defacing of the body/limbs looms large (the second song is entitled ‘Pieces Of You’); car-crash carcasses, cancers, stabbings in the back, to the face, in the heart...packs of rabid dogs, deceit, and constant, rapid descent (a theme constantly revisited). Then there is the "arm" of its title, the myriad connotations this infers. Whatever informed the lyrical conceits of this record, it certainly hasn’t resulted in the moments of inspired whimsy that coloured previous Islands/Unicorns output.

“Right from the start I was stabbed in the heart / Didn’t know I wasn’t breathing, didn’t know I had been bleeding / Opened the door, thought I was alone / But someone was hiding in the darkroom of my home.” – ‘Creeper’

In the aforementioned Thorburn is haunted by a crawling, malevolent adversary. Squelchy, muted guitar and an ominous bass-saxophone solo emanate claustrophobia, yet this song remains the most immediate on the album, unfeasibly (almost infuriatingly) catchy. This brings me on to a bigger (perhaps the biggest) point to make with regards the album: dark, scary stuff it might be, but to label it ‘bleak’ would be doing it a disservice. The absolute vitality of its arrangements ensures this: multifaceted and unusual they may be, they’re also deliciously intuitive and expertly rendered. Thorburn has labelled this record one “of intent”, and nary has a truer word been spoken.

For all the nightmarish-surreal imagery (and there’s plenty of it), Arm’s Way is_ ‘pop’ music, albeit of a wilfully diverse nature. Hyperactive punk guitars abound on the (suggestively titled) ‘J’aime Vous Voire Quitter_’ while traces of Marc Bolan’s impassioned glam leanings are palpable both in the bombast of the instrumentation and Thorburn’s vocal inflection. More progressive elements (gulp) are also discernible – most obviously in the album's crashing, angular finale. The group's harnessing and subverting of these genre cues is delightfully against the grain.

The vivacious spirit that resonated throughout Return is still very much in evidence too. Witness: the almost barbershop-quartet “ba-ba-ba”s that precede the stupendous close of ‘Abominable Snow’ (a song that has existed in some form since The Unicorns, erm, roamed); the twin ‘50s be-bop guitar break that breaks up the orchestral grandeur of ‘Life In Jail’; the doffing of caps in that erstwhile band’s direction come ‘In The Rushes’ (‘Jellybones’ anyone?) – there is a shrewd inventiveness most bands can only dream of on display.

For all the quality preceding, it’s the album’s closing triumvirate that really bolsters it towards the unforgettable. ‘To A Bond’ opens with alternately plucked and sweeping fantasia strings; it feels here like the band are effortlessly opening up, a trace of violin holding things together while guitars, drums and keys swirl ever-stronger towards an airy, harmonious close in what might be perceived an exquisite finish.

“My blood is dirty, and I like it / I like it that way / I could see the whole city, when I pushed you / Out of my fucking way.”– ‘I Feel Evil Creeping In’

But that wouldn’t be Islands’ modus operandi. The lyrics above comprise a modicum of said tune, filled as it is with the kind of portentous imagery that peppers the record (where time-keeping bees inhabit boxes and centipedes drift by on leaves). The ire of the lyrics seem to stem from strong deliberation on Thorburn’s part on the very nature of sin/repercussion born out of painstaking internal conflict, explored in more depth on the closing ‘Vertigo (If It’s A Crime)’. Traversing three distinct movements over eleven minutes from unassuming slide-guitar entrance to discordant close, it’s a fittingly behemoth finale.

Arm’s Way_ then, is as fascinating as it is unsettling, as unexpected as it is ceaselessly rewarding. Brazen noise sits next to magnificent style while its lyrics seem tailor made for umpteen accurate (contrasting) interpretations. It is a towering, complex achievement and startling progression to boot. The artwork, however… Well. Let's leave that one for now.

Against Me! at Islington Academy, Islington, Thu 17 Apr