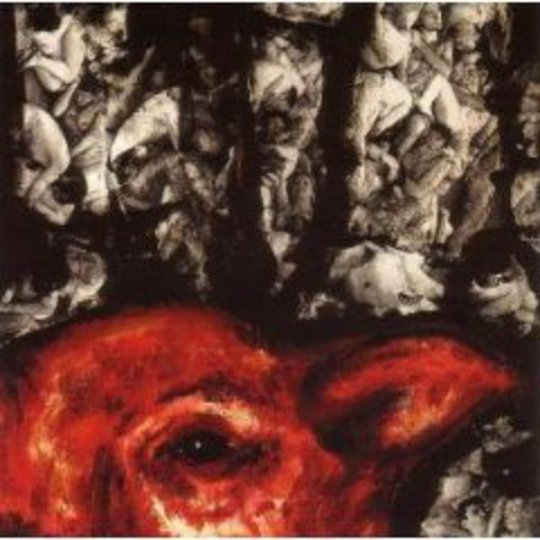 If Down I Go’s last album proper, This Is Disastercore, was the hardcore equivalent of a one-off history lecture helmed by Barney Greenway during a funny turn – literally, as the album bled laughs between its hastily delivered tales of unfortunate disasters from across the years – then its follow-up is the 10,000-work essay comprising the pass-or-die coursework. The Londoners have ditched (a lot of) the comedy and gone for the jugular, and rarely does Tyrant not leave its listener choked and bruised.

A phenomenal live act, Down I Go’s recordings haven’t always done their kinetic cacophonies justice, but this trait is remedied on Tyrant; lyrically we’re again turning the pages of a dozen encyclopaedias – or just skim-reading Wikipedia – as the lives of ‘popular’ tyrants from times gone by (and not so by) are dissected by vocalist Pete Fraser, but musically Down I Go have progressed leaps and bounds since their last outing. ‘Tomas de Torquemada’ – the first Inquisitor General of Spain – opens in fine form, with electro glitches and string (samples?) added to the traditional mix of harmonious backing vocals and blistering percussive bombast from expert sticksman Ben Standage.

Says Standage of the album: “When we started researching Vlad the Impaler and Pol Pot, we realised it’d be a much darker album; we’d have to take it more seriously”. While there’s still a comedic edge to the material of Tyrant – how can an album with track titles like ‘Joseph Stalin’, ‘Augusto Pinochet’ and ‘Aerial Sharon’ be all doom and gloom? – this serious approach to background development has extended to the execution of twelve arrangements that flex considerable muscles mostly, but also take the time to relax when their audience is utterly breathless and begging for mercy.

Much like Dillinger Escape Plan’s last, Ire Works (review), Tyrant finds Down I Go adventuring into compositional territories that even their firmest fans may have assumed beyond them based on older material. Yet they deliver the goods consistently, with flair to spare, and as such this long-player must go down as one of the year’s better hardcore releases. Its conceptual leanings may be an acquired taste, but the uncompromising brutality of these songs definitely is not.