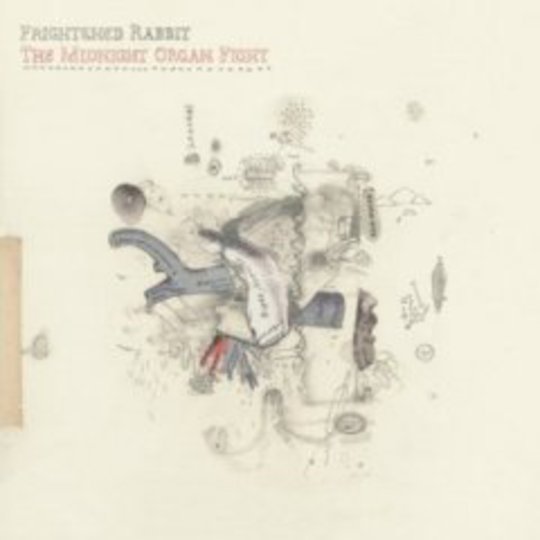 Sometimes it truly is the quiet ones. Frightened Rabbit are testament to this. Two years after the (first) release of their debut album Sing The Greys, a good album but by no means a classic, and infrequent trips around the UK toilet circuit the Selkirk, Scotland-based four-piece have, from nowhere, released one of 2008’s truly great indie-pop albums. Michael Stipe, take note.

On their sophomore offering the band have shaven off the instrumental passages that snaked through their first release and created 14 blissfully simple pop songs. Opener ’The Modern Leper’ and recent single ’Heads Roll Off’ yearn for Radio 1 A-List inclusion, all witty turns of phrase and soaring, catchy choruses, and yet they still have an undeniably rustic, scruffy quality, aided by Scott Hutchinson's wailing vocals and the substitution of a bass guitar for a second acoustic guitar playing lower notes.

It is on 'I Feel Better' that this mix of cohesive songwriting and clumsy delivery is at its most potent; a decidedly up-tempo number that has the same high-octane caterwaul-led feel to it as that on Clap Your Hands Say Yeah's more jaunty moments, but transposed into the near-orchestral resplendence of The Hidden Cameras.

But the beauty of The Midnight Organ Fight is that it works in any location and/or situation. It is of such a substantial quality throughout that it can last through repeated full spins on lonely train journeys through idyllic landscapes, yet still has a high enough ratio of glorious pop hooks and distinctive ideas per song to not be ruined by a click of a ‘random’ or ‘shuffle’ button.

Although this album could very well catapult Frightened Rabbit into the mainstream, and deservedly so, it is evident this is by no means intentional. The Midnight Organ Fight is neither a genuine 'safe' option for the band nor a blatant fan-base builder which obscures the band’s own charms as has been the case for fellow countrymen Biffy Clyro and (sort of – they’re based in Glasgow) Snow Patrol.

Here there can be no snobbish derision and calls of 'selling out' or playing to the average man; in creating an album showcasing the very best of the band’s talents they have created one so perfectly fit for, as Scott so vividly puts, “the soft, soft static” of popular radio. A happy coincidence, then.