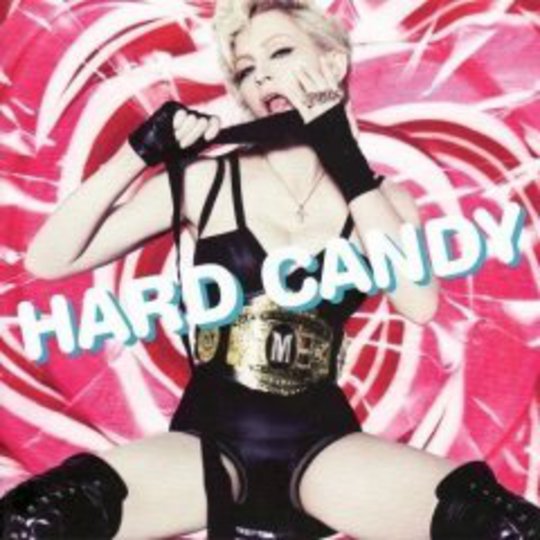 On her final album proper for Warners before embarking on adventures new under the Live Nation banner – another compilation record will close out the deal for good next year – Madonna Louise Ciccone Ritchie successfully ensnares a wealth of top-name producers and performers to lend her barely-bothered lyrical performances an air of modern relevance. The checklist is impressive, all names ticked off: Timbaland, Danja, Pharrell Williams, Justin Timberlake. Plus Madge gets a songwriting credit on every one of these 12 tracks. The pennies might’ve been splashed, but they’re likely to be made back: this is already destined for number one on the UK albums chart.

‘4 Minutes’ you’ll be familiar with, the album’s second track recently a number one single here and in Australia, Germany, South Africa and Canada. Indicating Madonna’s appeal hasn’t waned any since her last long-play release, 2005’s Confessions On A Dance Floor (number one here and in the US), the song’s one of the least offensive here, a refreshingly breezy offering that doesn’t overuse its guest vocalist (Timberlake) to the extent where he dominates; compared to what surrounds it, opener ‘Candy Shop’ (quite unbelievably more atrocious that the 50 Cent track of the same name) and ‘Give It 2 Me’, it’s a silken delight, enjoyable nonsense set to typically bouncy Timbaland beats. Shame that Hard Candy doesn’t really engage the listener after this relative highlight.

Phoned-in vocals from our central player – simple rhymes and predictable themes: sex, sex, sex… and possibly something else you’ll miss ‘cause of all the sex… and some chatter about dancing and stuff – and an over-reliance on the assembled cast of high-profile contributors ensure that Hard Candy feels weirdly pedestrian despite pre-release talk of it being the artist’s most ambitious album yet. There’s little here that’s not been done before, and better, and that isn’t available on albums by Gwen Stefani and Nelly Furtado. A decent guest turn from Kanye West on ‘Beat Goes On’ tickles the taste buds midway through proceedings, but even here Madonna’s delivery is characterised by a depressing languidness. Sure, the contract’s nearly up, but surely she could have got a little more excited given the conspirators at her disposal?

Quite evidently her attempt to court an urban audience after the disco leanings of this record’s immediate predecessor – whatever ‘urban’ actually means nowadays – Madonna’s sidestepping outside of her shimmer-pop comfort zone has resulted in a well-intentioned failure of an album that will be a commercial success regardless of any critical indifference. It can’t not be – Madonna is the biggest female pop star in the world, if not the biggest, regardless of sex. Fans aren’t likely to care that Pharrell and Timbaland are operating entirely on auto-pilot throughout blandly obligation-fulfilling arrangements like ‘Spanish Lesson’ (an echo of JT’s ‘Like I Love You’) and ‘Voices’; they’ll go crazy for this, even overlooking its who the fuck approved this? terrible cover art. More power to them.

Those of us with clearer vision, though, will have to go on missing the time when this pop chameleon could stimulate change in the wider musical landscape rather than resign herself to following already tiring trends.