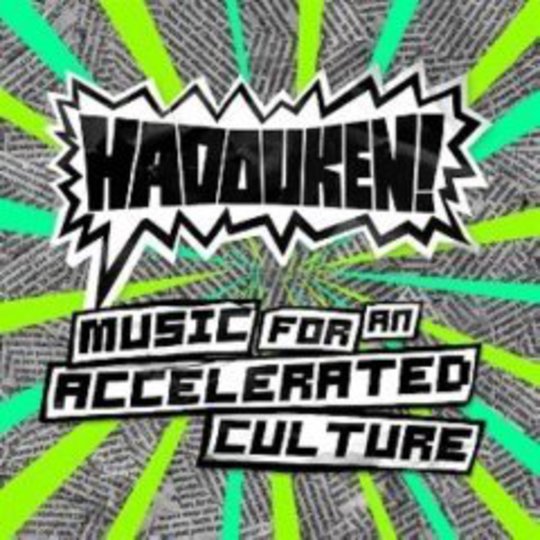 It would be so easy to expose the indie-crit fangs and lay into Hadouken!. Their eye-searing fashion choices, disturbingly savvy web 2.0 marketing tactics and scattershot approach to crafting anthems for the yoof, sets them up as an easy target for many a critic. The urge to brush Hadouken! under the cultural carpet with a few sarcastic comments and pretend they never happened is sorely tempting. But the fact is the band has happened. They_ are_ a part of the music scene. For better or for worse.

So for once, why don’t we ditch the pretence and address the issues head on? For those unfamiliar with the band, Hadouken! are a Leeds five-piece led by one James Smith. Having done time as a producer for grime label True Tiger Recordings, the man now specialises in crafting tunes that often reference indie, grime, rave and even a touch of R&B within the space of a single song. It’s a divisive mix that’s resulted in the majority of tastemakers scoffing at the group while simultaneously earning them an army of young fans since the release of scene-cussing early single _‘That Boy That Girl’ _way back in the early days of 2007.

For the hipster hordes who often look to the torn denim and leather-jacketed sounds of ‘70s New York and London as the benchmark for all that is good, the Hadouken! sound, as heard on debut Music For An Accelerated Culture, falls right under the definition of cringe-worthy in the fashionista dictionary. The truth is though, Hadouken! don’t make music for wayfarer-sporting urbanites dwelling in Shoreditch or Williamsburg. Instead, theirs is a sound for the underage youth running around Bluewater England. By mixing indie, rave and grime together into one package, it’s little wonder the band have such a strong appeal with the under-18s. Songs like the boy band-flavoured first single ‘Declaration of War’, or the credit culture critique_ ‘Spend Your Life’, are an amalgamation of all the music scenes pop-hungry suburban kids hear about but often have little experience with outside of what they download from peer-to-peer services. To put it bluntly, what Hadouken! offer is an easy to buy into musical value meal of rebellion for youth in search of a music scene that provides them with a sense of community and _won’t be co-opted by an infantile older generation perpetually in search of the latest and greatest. Think about it: if there was ever a sound that could offend people above a certain age, a hodgepodge of rave, grime, indie and pop is certainly it. After all, hasn’t offending the older generation been the modus operandi of popular music since the advent of youth tribes in the post-war economic model of the ‘50s?

It’s difficult to deny then, no matter how one actually reacts to the band’s music, that Hadouken! are the embodiment of a wider, suburban dwelling zeitgeist. One that encompasses and reacts to teenage lives spent loitering around the nation’s carbon-copy high streets.

Yet for all its reflection of our media saturated, mass-produced times, _Music For An Accelerated Culture _is also a victim of its own nature, with Smith making the rather obvious and rather unfortunate decision of trying to have it all, now. His quest for instant gratification ignores the time-tested fact that less is indeed more. Everything here suffers from an over-abundance of familiar ideas that collapse into each other. The result is a braying, headache-inducing heap piled high with musical and cultural debris.

Will any of this stop Hadouken!’s ascent? For the time being no, but the band should be wary. As those of us above a certain age know, today’s adolescent obsession is often tomorrow’s embarrassing musical past.

Half Man Half Biscuit