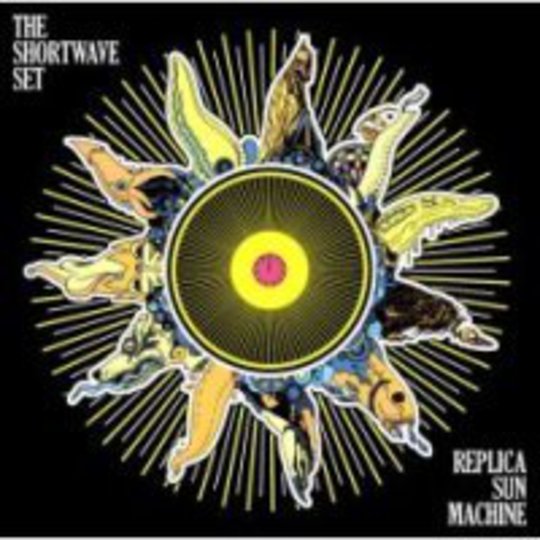 It looks set to be a good year for London’s The Shortwave Set. They’ve released a new record produced by high profile fan Danger Mouse and were able to rope Van Dyke Parks and John Cale in as additional contributors. To top it off, they’ve even been selected to play Massive Attack’s Meltdown fest in June. For a scraggly Deptford crew who describe their sound as ‘Victorian Funk,’ it’s certainly cause for celebration.

Yet for a group whose 2005 debut is hailed as an underappreciated gem, the question still hangs as to whether or not their new album, Replica Sun Machine, is worthy of the attention. Well, blow away the PR haze surrounding the heavy hitters involved and all that’s left is a collection of 11 songs firmly rooted in the middle of the road.

Indebted to the psychedelic-pop greats of yesteryear, much of Replica Sun Machine competently channels the sounds of the past. From ‘House of Lies’ , which invokes the spirit of John and Paul, to the glam-tinged Bolan fuzz of ‘Now ‘Til 69’ the tributes to the late ‘60s and early ‘70s fly at you hard and fast. But no matter how often The Shortwave Set attempt to inject something of their own into the proceedings, almost everything here suffers from an identity crisis that pulls the band in too many directions at once and finds them incapable of fusing their various influences into a unique whole. Which is a shame, because there are glimpses of brilliance on tracks like the cinematic ‘I Know’ and the melancholic ‘Sun Machine’.

Considering the supporting cast, there was a possibility that this could have been a record of the year. Unfortunately, this is just another case of too many cooks in the kitchen spoiling a broth already lacking in enough quality ingredients. It may not be hard to swallow, but Replica Sun Machine offers little in the way of excitement for the palette.