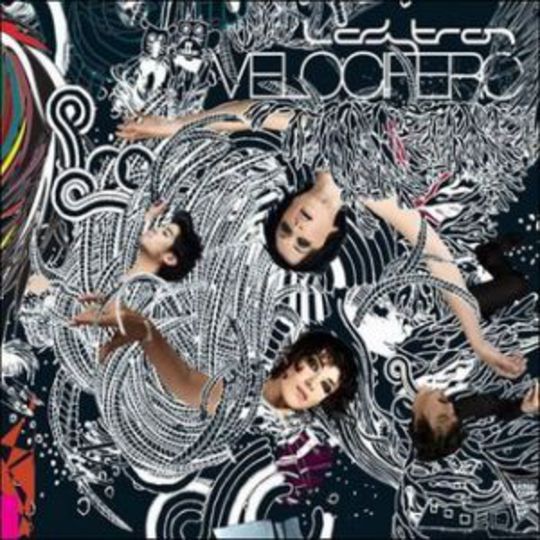 Some things come and go, falling out of fashion. Other things seem to simply ‘be’ fashion. Ladytron, for example, appeared to exist in a permanent stasis of cool, existing to excite our sense and allow us to stroke that little bit of hair you grow under your bottom lip, a la Tony Almeida from _24_.

And as fashion goes, it seemed inevitable that stock in Ladytron would take a dip after a few years at the vanguard of detached cool. Turns out, though, that the band were merely displaying their wares across the States and beyond, touring with the likes of The Chemical Brothers and Nine Inch Nails. Upon finishing their eye-opening jaunt around the world, the quartet reconvened in Paris to record this, their fourth studio album. Turns out that Ladytron aren’t quite finished yet in the fashionista stakes, with production duties helmed by, among others, Vicarious Bliss of the Ed Banger stable.

Velocifero shows that time in foreign climes has been well spent. Opener ‘Black Cat’ rides in on a wave of dark, menacing bass and sinister synth, hinting that they were taking notice of the way Trent Reznor handles those large cow sheds in the Midwest, while many of the other tracks present a refinement of their palate, nodding towards those bastions of ‘80s synth pop, New Order, Pet Shop Boys and Gary Numan. It’s a record that’s enveloped in darkness throughout its duration, but fails to hide a harmonious heart; ‘Ghosts’ brings a spectral literalness to itself, but throws in an insistent chorus, while ‘I’m Not Scared’ floods the speakers with urgent, ominous pop, its lyrics constructed around a play on line from A Street Car Named Desire. Ladytron, clearly, were always were a cut above the mindless electro louts.

There’s plenty of great songs to be found within Velocifero: ‘The Lovers’, a collaboration with Colombian group Somekong is a master class of timing and energy, whereas ‘Runaway’ is a summation of the strong, seductive femme fatale persona that Mira and Helen so masterfully slip into. Even with the ebbing of time and the slight hint that their seductress chic might be wearing a little, you still suspect that the duo are fully capable of doing a Hard Candy on your unsuspecting ass.

Where Velocifero does suffer is in its lack of editing. Largely self-produced, the album is overly-long at 13 tracks and it’s near single tempo dulls the senses after a while. Trimmed of a couple of tracks and with more than a single change of pace offered, the record could have been an excellent one. As it is, Velocifero stands as a fine piece of work that proves there’s a lot of life left in these synthetic machines.