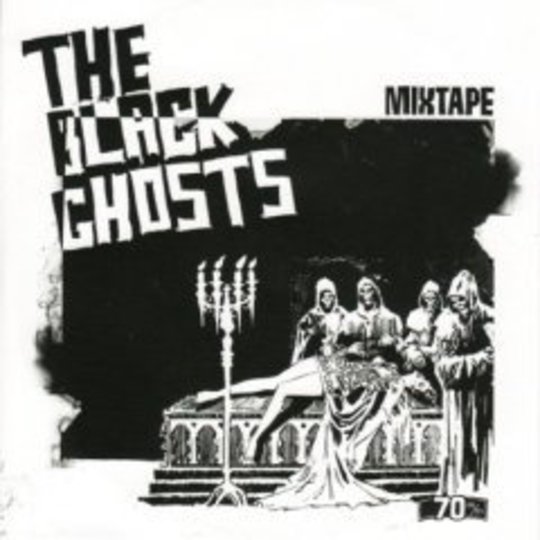 If you'd said eight years ago that that the singer from fey psychedelic indie-pop troupe Simian and DJ Touché from The Wiseguys (you know, 'Ooh La La') would team up to make credible, dark electro stuffz, laughs would have been flung in your face.

But nowadays are different times. More people recognise Simon Lord's voice as "the guy off of that Justice song", whilst half of his band are now Simian Mobile Disco.

So now the two are The Black Ghosts. Lord's voice is still very indie and mewling, but in a non-derisive way - kinda Thom Yorke-y in its dynamics, and Touché’s backing tracks ably support them, taking the standard distorted and bit-crushed sounds of modern Shoreditch electro and making suitably dramatic, dark and melancholic blah to support Lord's vaguely clubbified tales of lust and longing.

Anyhoo, this is a mixtape showcasing their tracks and remixes, as well as their taste, and it gives a good account of them. Their track 'Something New' is a highlight - all a bit Dave Pierce amfemz in its slightly late '90s synth throbs, but delicately arranged enough to let an emotionally affecting, genuinely great song shine through. Their stripped back rework of The Gossip's 'Listen Up' revitalises the song pretty effectively, even if it's basically a Wiseguys remix, riding as it does a Big-Beat-y hip-hop break and featuring no extra vocals.

Highlights not actually related to Touché and Lord are Boy 8-Bit's cuts - 'The Suspense Is Killing Me' in particular has a very Justice-y distorted sound with baroque, twiddly lines all up the wazoo, without sounding at all copyist.

All told it’s an effective, if not particularly necessary reminder and snapshot of the continued blurring of lines between ‘club’ and ‘indie’ music, and pretty fun with it.