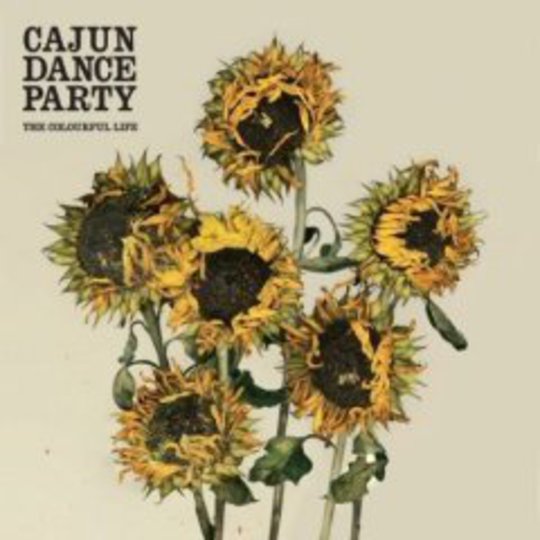 "Music's for the ears, not for feeling our young flesh," declared Cajun Dance Party singer Daniel Blumberg - somewhat bafflingly - when an interviewer made reference to his band's precocity recently. It's not just soundbites like this that suggest he's overly fond of his own voice though. No, CDP's debut album provides further, ample proof of that.

Seeing as we're not supposed to talk about it, we won't offer his age as an excuse for the indulgent nature of his vocal performance on much of The Colourful Life. Instead, we'll question why anybody would go so far out of their way to sound like The Kooks' Luke Pritchard.

From the record's very first chorus ("So pick up the pace / And enjoy the race / Because nothingness is nice / And feel the dance / And feel the mood / While you're munching on that slice"), his words are delivered with the same kind of exceedingly well-mannered, self-satisfied affectation that hampers Pritchard's band who - like Cajun Dance Party - actually have some really decent melodies in place but possess an eminently punchable singer.

Similarly, he might well be a nice young man in person but on record Blumberg's persona just grates. "You're the catalyst that makes things faster / Amylase will dry off the plaster" he sings on previous single 'Amylase', a decent little indie-pop ditty, but why does he have to be so damn earnest?

'The Race' befalls a similar fate, as naive as it is 'Naive', hampered by keening, preening, foppish faux-sincerity. Even their best song, 'The Next Untouchable', soon grows tiresome, and if 'No Joanna' is intended as a tender, plaintive ballad it sure as hell doesn't deliver on account of Blumberg's sledgehammer-subtle delivery.

It's not a class thing, either: for sure, he sounds like the kind of boy who knows his way around a cheeseboard, and may indeed have friends called things like Tarquin and Sebastian, but it's the complete lack of soul in his voice that irritates rather than the idea that his parents' bank balance extends to several figures.

Annoying music is bad music, regardless of origin. The Enemy, say, aren't risible because they've graduated from the Coventry school of working class hard knocks, it's purely because their music sucks balls. And the fact their singer looks like a rat. Ditto The Courteeners. Middle-class kids pretending to be oiks? Not a problem. Second-rate Libertines cast-offs talked up as "the best album since Arctic Monkeys' first"? There's the line, Fray, you've crossed it.

This isn't a character assassination (honest), more an explanation why an album that's actually pretty accomplished, musically, should, in the end, prove so forgettable. Even though guitarist Robbie Stern's classical training has been put to good use with some of these arrangements ('Time Falls', 'The Hill, The View & The Lights' two particularly impressive examples), all too rarely are other band members allowed to shine.

The latter, indeed, is superb for its opening minute and forty seconds as keyboard player Vicky Freund sings delicate lead vocals over swooning melodies; it's ambitious, widescreen pop, like Mystery Jets stoking an (amusement) Arcade Fire - the sort of direction we hope they might pursue in the future, but for now we'll be giving both Cajun Dance Party's young flesh and their music a stoically wide berth.