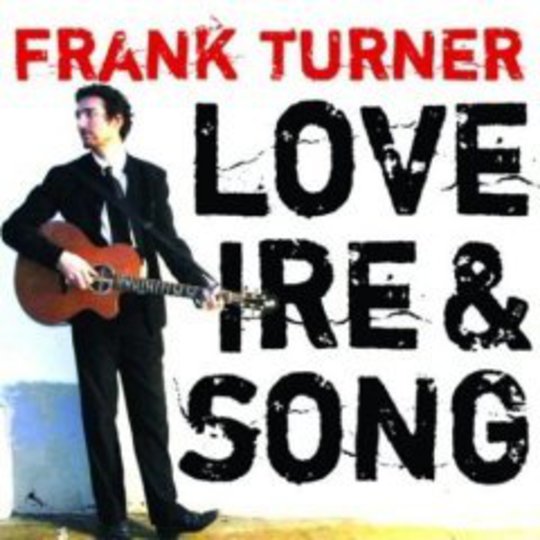 "Well I guess I should confess that I am starting to get old," begins 'Photosynthesis'. I love insight, me. Why confess? Why be so worried about kids using slang you don't understand? Frank Turner clearly feels vulnerable and bamboozled by the present day, which actually does nothing to explain the juvenile nature of his music. Later in this song, he also says that he will be defiant in the ageing process; that he will literally refuse to grow up. It seems his idea of what makes one youthful, what keeps one from becoming a gnarled old bison of a man, is just shouting that you won't let it happen. This song also makes the utterly, utterly cardinal and unforgivable sin of including the sound of all the studio attendees applauding at the song's finish. Hey, those guys work in a studio! If they're clapping it must be ace, right?

Love Ire And Song is a work just about devoid of merit. The most recommendable aspect of it is Turner himself, whose astonishing devotion to his craft and energy in performance are tragically placed into a piss-poor project. His lyrics, honest though they seem, are so indebted to Billy Bragg and the tough-as-nails romanticists of ageing punks everywhere that it's difficult to stumble over any trembling resemblance of original thought. The grandiose is laughably compared to the yearn of early courting, big and pointless words are thrown in just to give the appearance of quirkiness and the sudden bursts of melancholy are tacked on as if to say, "Hey, music's fun, but you gotta get serious sometimes, yeah?"

At one such emotional point, at the very end of 'Jet Lag', the embarrassing decision to have Turner saying "that's the one…" assuredly is just villainously conceited. What better way to make fools smile their Daily Mail _smiles than to have the artist agree with them about how thoroughly and reliably excellent that song was? It makes one a little queasy. It's a shame, because there's no real way to criticise an artist like this. His fans will care very little that anyone might have a bad word to say against him, and this record will sell well enough for him to make another. Idiots will always win. _Love Ire And Song is pointless. Not unlovable, but ultimately redundant.