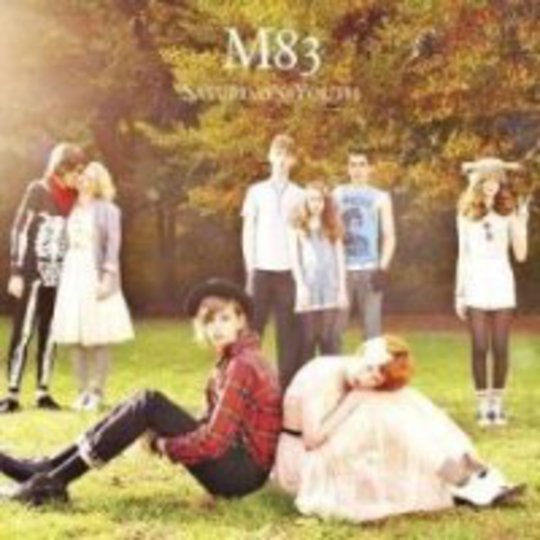 Ever chanced upon an early Picasso or Pollock canvas and thought, “Shit, this guy could really _paint”? Or found yourself pleasantly dozing to the strains of _Music For Airports, safe and warm in the knowledge that this man wrote ‘Needles In The Camel’s Eye’? Not to go all reductio ad absurdam on your asses or anything, but Saturdays=Youth could be the record for you.

At which point we should probably explain that M83 lynchpin Anthony Gonzales, last seen round these parts stilling the surging tides of his outfit’s sound to an ambient wash with last year’s Brian Eno-inspired Digital Shades Vol 1, has turned in his poppiest set to date.

With the stated aim to capture on record the brash exuberance of John Hughes’ Brat Pack high school comedies, Gonzales has taken a dive head-first into the lexicon of ‘80s pop culture and emerged with a clutch of winning tracks that borrow openly from any number of pin-ups of the era and glaze them in his breathy, expansive shoegaze sound his to generally winning effect. Think Molly Ringwald’s parted, pillar box-red lips, dry ice and cryogenics and you’re sort of there.

Appropriately enough for a record so in awe of its references some of the tracks here sound superficially arresting but offer little in the way of insight on their source material, but the spirited likes of ‘Graveyard Girl’ and ‘Kim & Jessie’ are simply too euphorically rendered to ignore, the latter in particular a giddy, phosphorescent gem roughly in the mould of mid-period Cure.

And while Saturdays=Youth is undoubtedly a record fired by a sincerely-felt sense of nostalgia, it’s perhaps worth remembering that these weren’t even the films of Gonzales’ youth (he’d have scarcely been out of nappies by the time of Hughes’ 1984 breakthrough 16 Candles). As with all of M83’s music it’s less about the specifics and more about achieving the right textures, which they do beautifully well here.

Predictably there’s a slide towards more abstracted material toward the latter half, and parts of Saturdays=Youth are all hairspray and no body, but the whole thing sweeps along with such an irrepressible mix of youthful invincibility (‘We Own The Sky’) and flouncing fatalism (‘Too Late’, ‘Graveyard Girl’) it sucks the wind right out of your cheeks before you’ve had chance to huff.

“I’m only 15 years old and already I feel it’s too late to love. Don’t you?” opines our morbid protagonist on ‘Graveyard Girl’. At 27, Gonzales sounds as lovable as ever.