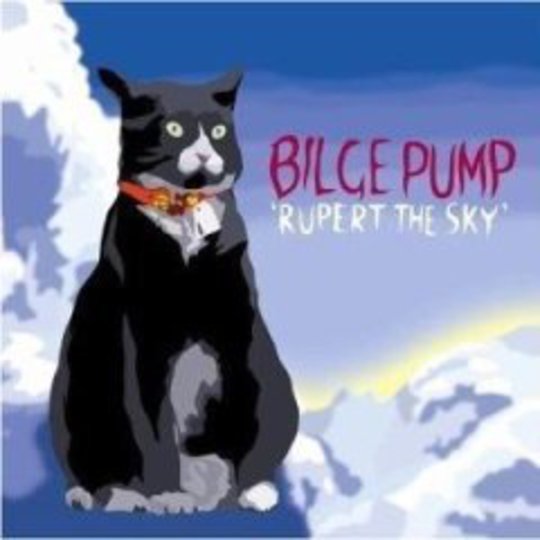 Ah, shouting. Leeds’ Bilge Pump certainly enjoy letting rip more often than not, as Rupert The Sky is characterised by discord. Their noisy, scrappy post-punk has more in common with contemporaries such as the late Mclusky than any other, arguably more canonical touchstones, but unfortunately doesn’t stand up all that well on its own two feet.

One thing Bilge Pump have in spades is personality, although that’s not entirely a good thing. “We were genuine, happy children / But our dad was a miserable cunt” goes ‘I Am Perfectly Fine’, but such moments of humour are rare and sadly lost amidst the clatter. ‘Can I Touch Your Leg’ starts with a series of howling, moaning guitars layered over one another that provides almost an oasis of calm when placed in the context of the album. But it’s over far too quickly and descends into – shock horror – yet more noisy riffs and purposefully atypical song structures. While there are moments when their desire to annoy and frustrate is what drives their music powerfully and well – ‘I Like Your Style’ is a truly funny, catchy little ditty that recalls what Eddie Argos might come up with if the rest of Art Brut had been brought up on Wire – on others it simply gets in the way. ‘The Fuckover’ and ‘Brown Ale For Sister Sarah’ each have the initial potential to be great, all pounding drums and pushy guitars that trip over one another in the race to get to the end of the song, but take seemingly intentional wrong turns, as if writing a song with a beginning, middle and end is verboten for Bilge Pump.

It’s a shame, because there’s more than enough evidence on Rupert The Sky that they could grow into being a fine underground band. When ‘Om Nom Savoy’ kicks in it’s a frenetic, jagged anti-pop song that is sadly spoilt by some wilfully oblique ranting about cleaning up the kitchen, and it perfectly encompasses both the good and bad sides of Bilge Pump. It’s like they’re scared of writing anything too uniform, so by shoehorning in a bunch of annoying non-sequiturs it’s their defence mechanism. Which is a shame, because this could’ve been belting.