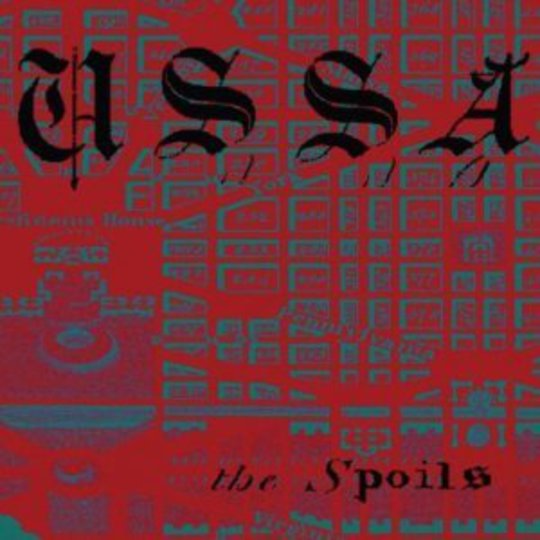 Take one of the guys from Ministry and one of the guys from The Jesus Lizard, and what do you get? Industrial shoegaze indie? Metallic soundscapes topped off with a smattering of cod-psychedelia? No, you get Ussa, a one-trick pony already on its way to the knacker’s yard, handicapped by a terminal lack of invention and an unwillingness to do much more than phone in a paranoid, seemingly incomplete album.

The Spoils is, sadly, almost entirely devoid of merit. While Paul Barker (him from Ministry)’s basslines do add a tangible sense of menace throughout the album, the fact that their rumble seems to be repeated almost ad nauseum utterly negates their impact. And while Duane Denison (him from The Jesus Lizard) tries to add a touch of colour here and there – and, on ‘Middletown’, almost succeeds – songs are very rarely anything other than a single idea stretched out almost interminably. ‘Autumn Flowers’ is a collection of lazy lyrics drawled over the soundtrack to a fight scene from some god-awful cybergoth movie, ‘Dead Voices’ sounds like it was designed to be listened to by a kid in his bedroom just before he shoots up his school and the less said about the awful, awful ‘Peculiar Things’ the better.

A decade ago Trent Reznor was not only doing this sort of thing far more successfully but was imbuing his music with unique touches of inspiration here and there – The Spoils is a cynical, criminally uninventive record that feels incredibly dated. You’d expect two stalwarts of the music scene to have had the nous to realise that a 50-minute, 11-track album needs to have at least a few discerning moments spread throughout, rather a single overarching sound and theme. But no – listening to it on shuffle is exactly the same as in order, and even picking out moments to discuss in order to quantifiably say why it’s so bad is actually rather difficult. But it is very, very bad.