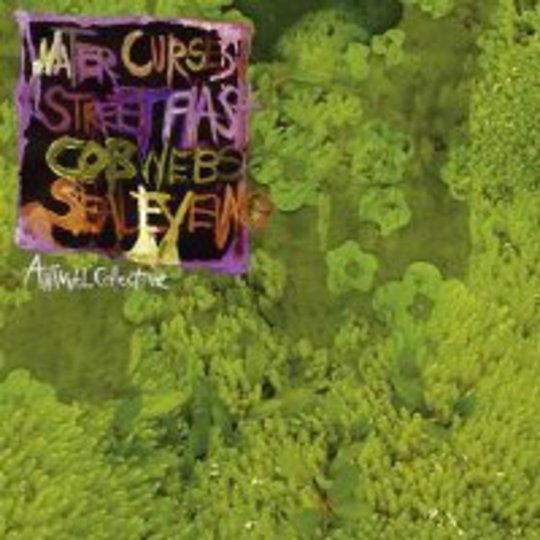 Released a year on from its parent album, these EP outings tend to offer up nothing more than giblets not worth the salt, hosed-down versions for aficionados and few others. Water Curses? Quite.

But Animal Collective have been releasing post-record leftovers for the last few LPs with the neo-tribal haunts of Prospect Hummer (2005) and People (2006) both fine concluding chapters for Sung Tongs and Feels, these coming before the Baltimore co-op dived headfirst into the electronic swamp of last year’s blissful sugar-rush album, Strawberry Jam (review).

Now far removed from their initial psych freak-folk tag, Noah Lennox’s sedating stints as Panda Bear seem to have informed proceedings, with the usual exhausting haywire procession here toned down, with the epiphanic screamo tendencies beaten to a post-Person Pitch pulp, hazy amidst the dub hubbub. Even at their most docile Animal Collective previously managed to sound manic, even with the tranquil lull of ‘Leaf House’ underpinned by a frenzied hullabaloo with Lennox and David Portner (Avey Tare) gargling away. Odd, then, that Water Curses clambers up pop plateaus with a far more straight-laced approach than evident in previous output, a marriage between the placid Person Pitch and the mayhem of Strawberry Jam, with Portner’s unhinged Jackanory rhymes a subdued jabber, slipping in haunting remarks that he’ll “slip down your throat” between the usual verses of vivid hypercolour imagery.

‘Water Curses’ is a bout of sickening carousel chimes, tin-pan Tropicália and corroded dub (haven’t we been here before this year?), but as opposed to El Guincho’s draining fanfare Animal Collective are just as remarkable leading a maddened march as they are when introspectively inspecting their acid-splattered insides during moments of calm. Whilst everyone, from thesp beaus to Battles’ ginger stepchild, pine after Dave Sitek’s attentions as if he’s the William Orbit for the Pitchfork generation, it is producer Scott Colburn that has underpinned Animal Collective’s transformation from primal buffoonery to off-kilter electro-pop extraordinaires, with all but ‘Seal Eyeing’ recorded during his Strawberry Jam sessions, marking similar tracks the record rode down. With the methodical chug of ‘Street Flash’ working with the same paint palette as ‘Winter Wonderland’, Porter’s disjointed delivery drowned by lumbering basslines, it resembles cLOUDDEAD’s rasping raps and deadened beats.

Difficult to pin down, ever glad to fly the nest, Water Curses gives few clues to where Animal Collective want to head next, but is all the better for providing a rare moment of retrospective restraint as we all play catch-up.