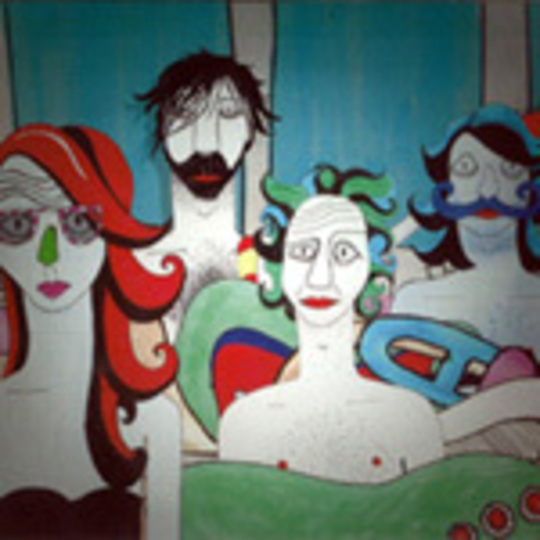 Admittedly, I was late in discovering the brilliance of The Knife. At first I was not a fan, writing them off as rubbish more than anything else. Yet, the subtlety in their beats, clever use of reverb and song structures won me over, along with everyone else a few years ago. Suddenly disco was cool and scores of DJs and outfits lined up to test their mettle in mixing electro with disco, techno and acid house. Some examples are brilliant; see any Lovefingers compilation or the new Gruff Rhys project Neon Neon for proof. Others lack substance, style or seasoning, opting to simply recycle nu-rave, deep disco and techno aimed at making people dance for reasons unknown. Substance is integral in electro – the beats have to be so thick you can grab them, squeeze them and rub whatever comes out all over you before hitting the dance floor.

This brings me to east Iceland’s Bloodgroup, a trio of siblings and a friend from a town of 1,600 whose debut, Sticky Situation, was met by heaps of critical acclaim at home. The formula in Bloodgroup is, more often than not, much of the same as The Knife, early LCD Soundsystem and other dance acts blending dirty disco, trance and live instrumentation. Yet, Bloodgroup is young, very young - teenagers or early-‘20s mostly - and instead of presenting a cohesive gem of a dance record, Sticky Situation presents four obviously talented individuals brimming with ideas but lost on how to properly arrange them in their chosen genre. Yet, organization is only one element in the pot, and the songs that the band wrote, recorded and arranged in various community centres and halls in the middle of their nowhere display talent, heaps of it, and a promise that, with time, Bloodgroup may be James Murphy’s next pet project.

‘Moving Like A Tiger’, the lead-off track, encapsulates the strengths and weaknesses that make up Sticky Situation. The song establishes a dense disco backdrop that ebbs and flows through sensual vocals that almost sweat sex. Lilja, the principle vocalist in the foursome, has an entrancing voice, one that makes you think of the bedroom before anything else, and she uses it beautifully throughout the track. Yet, as the second chorus winds down, the band erupts in an Icelandic Beastie Boys influenced hip-hop mess, sullying the bridge with inane hip-hop and crossing the wires of what was a stellar track. The damage is done. Keep the hip-hop out of this guys and gals; there is no need for it.

Moving on, Bloodgroup reinsert the disco meets techno vibe in ‘Hips Again’ and ‘Red Egypt’, throwing a little funk in there for good measure. Spirals of musicianship characterise the core beat, from clever drum samples, percussion blasts and impressive synth work, but the quartet find themselves entrapped in a stylistic quagmire. One moment we are back in the ‘80s, while the next techno takes precedent. The weaving from one to another is impressive, the end result is not. ‘The Carpenter’ is another casualty. It starts interesting enough with deep disco, but then the men start screaming, hooting and consequently ruining the song. Lilja rescues the chorus from oblivion, but all in vain as immediately after the sentence, sirens replace the melody. ‘Masterplan’ replaces techno with grime, showcasing once again a belly full of ideas in Bloodgroup, but not enough maturity to properly organize it yet.

All in all, Sticky Situation is an impressive treasure trove of creativity from these Icelandic kids, proof that Bloodgroup is capable of enticing those in love with Murphy, Rhys or The Knife. Yet, the frustration seeping from all these clashed arrangement exemplifies a band trying too hard to get it all out there at once, failing to understand that this is only one chance of many if they relax, scribble together a plan and patiently work through their ideas. Until then, this will do.

The Boy Who Couldn't Stop Dreaming