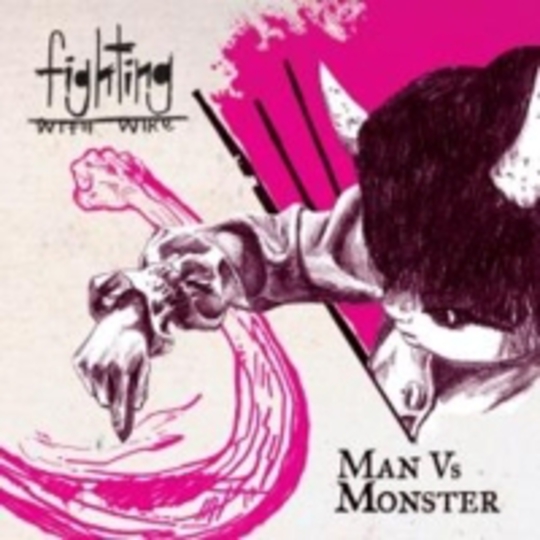 Cahir O’Doherty is a busy boy. Chiefly responsible for the widdly bits in Jetplane Landing songs, the sometime Seafood bassist and Fighting With Wire frontman will perhaps one day become entirely pastry-based, his fingers are in that many pies.

But enough of poor edible metaphors – as his other band took one giant leap into concept album territory with last year’s Backlash Cop, O’Doherty was busy putting the finishing touches to FWW’s debut album, joined by his former Clearshot cohort Craig McKean on drums and bassist Jamie King. Finally due to arrive only now after four years of on-off touring, seemingly endless new bassists and little to no recorded output, Man Vs Monster is an accessible rock monster kept in line with strict precision, switching slickly between various styles, from sharp-edged punk rock to something decidedly more radio-friendly.

Almost expectedly there are comparisons to be drawn with Jetplane Landing, from Doherty’s familiar middle eight adventures in fretboard technique, pulling at the melodies like an excitable dog on a leash for ‘My Armoury’ or Lowe-endorsed single ‘Everyone Needs A Nemesis’. This is no tribute act to a bigger brother though, with their list of sleeve-worn influences being long enough to keep things from stagnating whether it’s through the woah-led, Clyro-reminiscent chorus of standout explosive opener ‘Cut The Transmission’, the brief wilting moments in the verses of ‘Long Distance’ that sound not unlike Superunknown-era Soundgarden or the yelping yourcodenameis:milo-isms that pop up sporadically.

But whether you’ll enjoy every moment of this album will depend on your view on Americanised rock. Sitting side-by-side with the album’s most serrated moments are the Grohl-esque touches - we're not talking balls-out The Colour and the Shape_ stuff here either, more like 'Learn To Fly' with the big choruses that suggest we might all be spending eternity trapped under winter skies in a faded grey suit on barren ground. Oh, and we’ll be joined shortly by Jimmy Eat World for tea.

Yep, to get to Man Vs Monster’s most passionate and enthused moments, you’re going to have to sit through its few foibles, the few moments where it opts to sit back in second gear rather than go all-out to impress you, though it’s surely worth it even if it does sometimes try and make you its MOR-rock bitch. Surprisingly accomplished for a debut, aesthetically pleasing, never troubled in the confidence stakes and with all quiet on the Jetplane front and Atlantic knocking on the door, on the evidence of this perhaps the time is finally right for Fighting With Wire to take centre-stage.