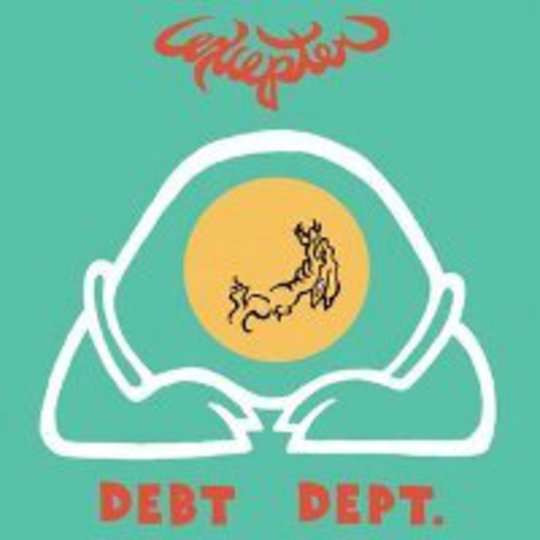 Excepter are one of those _bands. If you're a leftfield listener you'll know of what I speak; they don't strike you as more than goofy noise hooligans at first. Then, when you're listening to them walking through a back-alley on the way home from work they sneak up on you and crack you on the skull with a metal pipe. _"They're fucking GENIUS!" you'll manage as you stumble to the hospital, droplets of blood forming a trail behind you. The doctor will ask you what you were doing when this 'accident' occurred and you'll just grin cheaply like it's all a joke between you and an unspecified third party. Claiming you “walked into a door” or some horseshit, you'll be released from the hospital and into the world. But nothing will seem real; echoes, drones and beeps/bloops will emerge from out of the corner of your ear and you'll become scared. Real Scared.

Then, only then will you truly know what it's like to be eccentric enough to create an album like Debt Dept. Not as glamorous as it seems, is it? Hip-hop beats, videogame music run forward and backward, all manner of 'clips' and 'clops', chimes, random voices entering and exiting the fray just as they would inside a schizophrenic hipster's brain, clarinets ... yeah, these guys are tweaked. Thing is, you'll have a lot of fun visiting Excepter's Spinning House of Trans-Dub if you're open to all manner of anti-pop experimentalism, so long as you don't try and show it to your friends. they'll probably treat you like a Brooklyn bum rambling about aliens – trust me, they aren't ready for this.

As clumsy as a lot of these tracks are, they're like square chocolate-chip cookies: you don't understand why they're shaped the way they are, but you'll have a lot of fun ingesting them regardless of their awkward, often-ugly form. Taking form-as-function art pretence to an extreme level, Excepter are a Special Needs band, and you'll be perfectly willing to give them the extra attention they need to flourish if you're underground enough to have heard of them (outside of this review, of course) in the first place.