Break Your Arm For Evolution 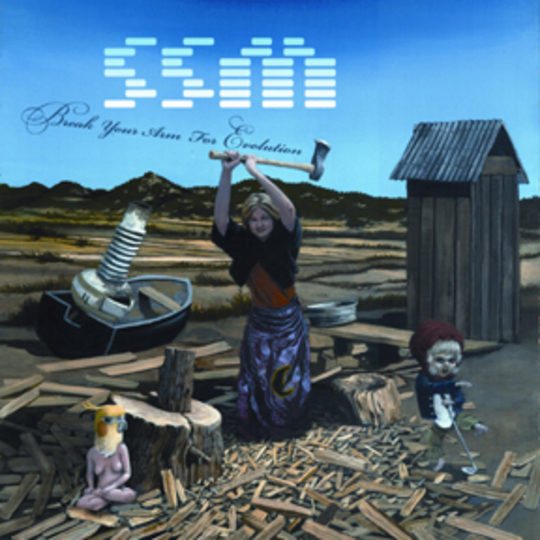 "Deja vu, deja vu" chant SSM on one their more memorable choruses here, but even for garage-rock aficionados familiar with the Detroit trio's past endeavours, there's precious little of that on Break Your Arm For Evolution.

The back cover reveals the band to comprise a trio of identically attired slacker/hippie/beardy-weirdies, but the music they make on the follow-up to 2006's self-titled debut album pays less mind to Pavement or Devendra than it does, say, MGMT - who also fuse a variety of noises you wouldn't necessarily associate with guitar music into a compelling sort of electro-glam rock.

As we've mentioned, SSM have previous: guitarist Marty Morris and bluesy garagemen Cyril Lords, keysman John Szymanski with The Hentchmen (and also live stints with The Detroit Cobras) and tub-thumper Dave Shettler's credits include The Sights and Moods For Moderns. Detroit, Michigan is where these guys earned their spurs and beneath the electronic haze that pervades Break Your Arm For Evolution, these primordial, garage-rock roots are firmly in evidence.

'Regenerate Your Face', for instance, channels Black Keys-style sludge-blues - coincidentally, it's BK mainman Dan Auerbach who twiddles Break Your Arm...’s knobs - while six-minute scuzz-punk number 'Marian' is based on a manic Morris lead line straight out of The Meat Puppets school of odd.

Indeed, the Puppets' (and would we know about those guys if not for Kurt Cobain's patronage?) influence hangs heavy throughout; from the off-kilter lyrical slurring - not to mention the titles of the songs: see the aforementioned 'Regenerate Your Face', 'Let's Make A Baby' and 'Johnny's Holding You For The First Time' - to the rhythmic, cosmic feel to the record, it's certainly a refreshing change to the, um, meat 'n' potatoes we're so often served.

When they do_ do straight-up rock, though, they do it well. _'Emotional Tourist' is a full-throttle, organ-powered piece of punk that could easily send a dancefloor wild. Kookiness aside, much of the album has that kind of immediate appeal, often due to Shettler's incessant, propulsive drumming.

And they certainly end on a high, with 'Underground' fizzing along like a garage-rock band trapped in a fireworks factory and given seven minutes to play themselves out. Here's hoping SSM didn't actually injure themselves in the making of Break Your Arm For Evolution, but if they did: guys, it was worth it.