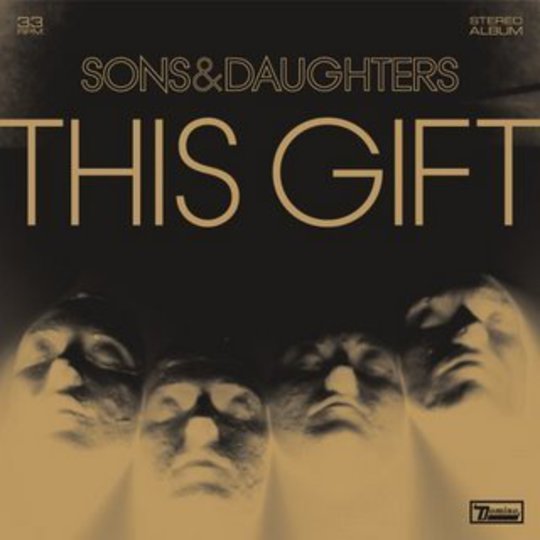 "You never asked for an audience / So why do you care about the reviews you're gonna get?" chides Sons And Daughters vocalist Adele Bethel on 'Split Lips', the second track of her band's best album to date.

Ironic, perhaps, because This Gift is the first record where the Glaswegian quartet actually sound like they might be trying to appeal to the masses. Is that a criticism? Is it heck. With the occasionally maligned Bernard Butler at the helm, they've produced, by their standards, a glossy pop record. And it's a sound that suits them.

Opener and lead single 'Gilt Complex' is the perfect introduction to this widescreen vision, all raging guitars and dead-eyed Bethel vocals. Rest assured they've not lost the sardonic edge that made previous offerings Love The Cup and The Repulsion Box such intriguing listens: by their own admission 'Gilt Complex' is an attack on vacuous celebrity culture.

No, Sons And Daughters aren't a band you'll find treading red carpets, unless they've been stained that colour by wine, blood or possibly both. There's something of the dark about them, and even Butler's unashamedly bombastic mix can't mask their often morose sentiment.

Filmic influences recur throughout, most obviously on the Cure-esque 'Darling' (named after a Julie Christie flick of the same name) where Scott Paterson's roving guitar line gives way to a delightful dual-vocal chorus. "She'll make a darling bride," purrs Bethel, though the conviction of her delivery hints at an underlying contempt. "Twisting in, twisting out the knife," she sings later, suggesting tragedy will follow for that particular romance.

Indeed, a pop record This Gift may be but there's less sugar here than bitter-tasting spice. "Collision came as consequence / Watching the scene after the accident" ('Split Lips'), "The son she'll never have" ('The Nest') and "Said that you'd call / Scream when you're leaving / At least I'm heartless so you sparked some feeling" ('Goodbye Service') is hardly the kind of imagery you'd expect to find on One Night Only's debut LP.

But then that isn't the kind of pop we're talking about here: namely, classic, old-fashioned pop. When songs were songs. 'The Nest', for instance, is underpinned by massive, Spector-ish drums, and some of those harmonies (particularly on 'Darling' and 'Iodine') could so easily belong to The Ronettes. The work of ‘60s impresario Joe Meek is another, self-confessed, reference point for the record.

In that tradition, pretty much every track on This Gift could be lifted as a standalone single - for all their qualities, that's not something that could be said about either Love The Cup or The Repulsion Box. 'Rebel With The Ghost' is perhaps the poppiest pick (replete with_ "na na-na na na na-na na"s), but it's not hard to imagine _'Iodine', or 'House In My Head', or 'Flags', or any of the others, on daytime FM.

Some will undoubtedly see This Gift as the record where Sons And Daughters made a break for the mainstream, and criticise them for it. Certainly Butler's touch hangs heavy, but rather than smooth their irresistibly rough edges, he's actually accentuated them by wrapping their cloak-and-dagger art-rock in shiny pop packages. From Bethel's sultry, silk-smooth delivery to David Gow's sparse percussion, they sound like they've found their niche.

Look beneath the surface sheen, then, and you'll gratefully receive This Gift as the best, most complete, Sons And Daughters long-player to date.