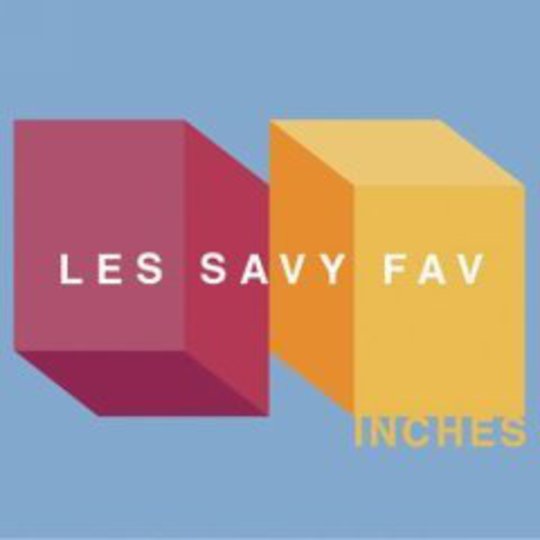 Would it be an understatement to say that, with the release of 2007’s Let’s Stay Friends, the ever-rocking Les Savy Fav finally made some headway towards a mainstream they never explicitly courted nor made much effort to keep sweet? It’s not like they were ever a necessarily contrary band who rode on any bandwagon of unselfconscious frontmen/riff-laden punk rock/er, songs about shagging show-jumpers but now, when they’re playing bigger venues over here than ever before – and not just to the ATP brigade who’ve loved them from Day One – and Tim Harrington appears in actual print magazines rather than on blog after blog, the question remains: does the world need a reissue of Inches, their expansive singles collection?

About 44 months ago this here website gave this exact album 9/10 and called it “genius”. What’s changed? Well, as far as LSF go, very little. You can trace their development from this ragged bunch of old vinyl singles up to the lean, focussed Let’s Stay Friends, as practically absent from Inches are the short, concise bursts of razor-wire guitar and larynx-flexing yelps that characterises their recent material. Instead, what’s on offer is 18 tracks of deep, dense punk-rock that show a band unwilling to simply sit in one particular genre. Yes, it’s all reminiscent of pretty much every band ever to have turned up the gain and done a bit of shouting, but it’s only slightly reminiscent – only two tracks last less than three minutes and the majority steer clear of the vast choruses of ‘Patty Lee’ or ‘The Equestrian’. And with the menacing ‘We’ll Make A Lover Of You’ and the frankly brilliant ‘The Sweat Descends’, they’re again making a claim for status of The Best Punk Rock Band Most People Haven’t Heard Of But As Soon As You Play Something By Them Everyone Starts Asking You What It Is Because It’s Really Fucking Good. And they’re not far off.

Hell, you know all this already, or at least suspected so. The original review’s here and, seeing that as far as I can tell absolutely nothing’s changed, this should still be a nice nine out of ten, yes? Well, ish. Listening to Inches in 2008 is a timely reminder of how little time bands have nowadays to grow and develop before being unfairly and prematurely ejaculated onto the cleavage of the music industry. Considering that “sixth form poetry” is now less a sly swipe at bad lyric-writing and more an actual description of dozens of bands’ actual songwriting MO and groups are being plucked directly from school (or stage school, but that’s another matter), it’s hugely refreshing to be able to hear how a band takes the time to evolve without an evil eye on the mainstream.

Is it an indictment of the current state of muzak that a reissue of a singles collection is still one of the most impressive albums of the month – and by definition, the year so far? If it was from any other band then I’d have to say yes. But the sheer indisputable quality of Inches marks it and its creators out as musical mavericks who have already paid their dues and, quite frankly, don’t need you to love them. In twelve years you won’t see Seth Jabour on Mobile Act Unsigned trying to pretend to be relevant because, in the best way possible, LSF have never been relevant. Other bands play lip service to them quietly and even though you could argue they’ve made as much of a contribution to modern music as Pixies did, that’s not what they’ll be remembered for. They’ll be remembered for never making anything other than fine, honest music, and this reissue is just a reminder from Wichita that if you haven’t got into this band already then now you’ve go no excuse. Yup, that nine’s well-deserved again – but only if you don’t already own it. If you do – well done. Brill, innit?

The Problem of Knowledge