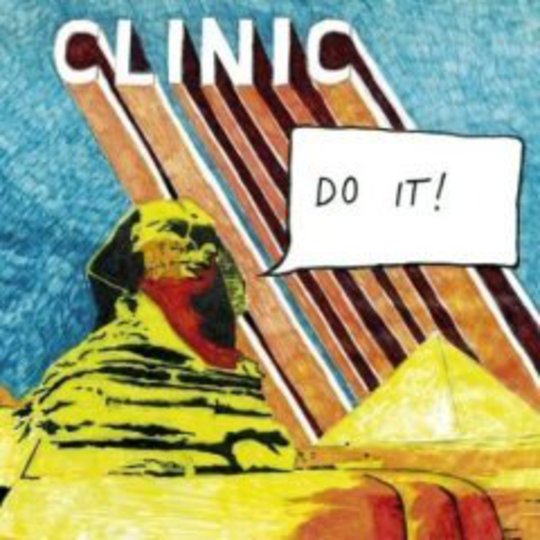 The four masked men from Liverpool are at again. Having caused a few ripples at the start of the decade – a period pop historians should rightly be calling The Dawn of the Internet Age – Clinic have been touting their unique brand of organ-driven rock for quite some time now, with Do It being their fifth studio LP release.

To their credit, they’ve never once strayed the course to embrace the Beefheartt-loving grunts of their native city, let alone the ice princess stylings of Ladytron. Instead, they’ve hacked their way through the musical jungle to craft a singular sound in love with the fuzz of vintage surf rock, dub, mod psychedlia and the occasional stab at kraut-rock.

A unique entity in every way then, Clinic still stand out as a distinctive UK band on a playing field littered with bands whose concept of individuality extends only as far as the clothing racks of their local Topshop.

The question is though, is it sustainable? Do Clinic, after already releasing four albums of a similar nature, still have something to offer? A quick listen to Do It’s ‘Free Not Free’ or _‘Memories’ _reveals the all too familiar touchstones that have long defined the band’s sound, so it would be easy to say no. But instead, and much to Clinic’s credit, all eleven songs here compliment and expand upon what’s come before.

‘High Coin’ sets itself up as the perfect soundtrack to the ‘50s biker gang film of your dreams, while ‘Corpus Christi’ slowly wraps itself around Ade Blackburn’s eerie croon for a highlight that can rightfully be held up alongside past high watermark ‘The Second Line’ off 2000’s Internal Wrangler.

_Do It _is simply a case of Clinic once again doing what they do best; but with a new-found vigour that rediscovers the confident swagger of earlier releases while building upon realms explored on later excursions. Considering most bands find it difficult to even write a half-decent second album after the initial buzz has died, that’s certainly cause for celebration.

The Age Of The Understatement

Matthew Ryan Vs The Silver State