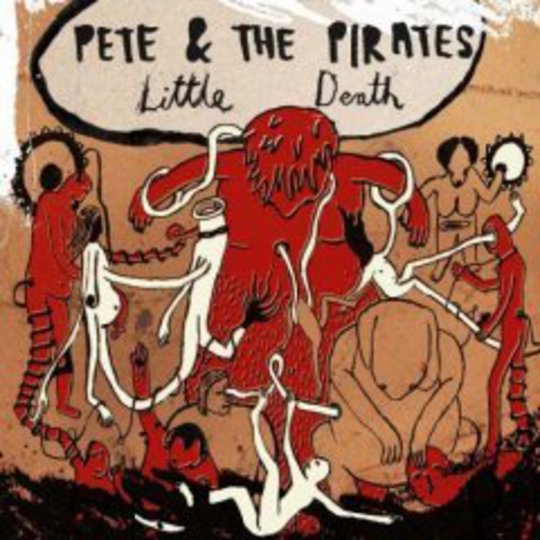 I used to hate Pete & The Pirates – I mean really fucking hate them. All previous encounters with the Reading-spawned quintet made my blood boil in the manner a cheated nymphomaniac would stove-simmer a vat of sweet, defenceless bunny rabbits. From bitterly enduring a wretched swine of a live showing last summer, to The Sun’s oh-so-informed commendations for 2008 (not to mention having to utter their god-awful name every so often), this was a band I promised I’d avoid forever more; a band my body would outwardly reject like a stinking, undercooked kebab after a night on the tiles. Yet here I am, toes a-tapping and lips a-humming to a record I simply want to detest – I just can’t.

Y’see, the moment P&TP’s (the acronym provides a slight respite from that spine-shuddering moniker) debut LP Little Death kicks into gear with the glittering rhapsodic sheen of ‘Ill Love’ I’m a goner; lost forever in an incessant maze of conquistadorial guitars and hustling percussion. It’s a hypnotic opening gambit – one that has nerve ends perched like periscopes scouring for the source of such sensor-pleasing delights – and, in just two and half minutes of scrumptious, shimmering pop-picking, all thoughts of P&TP being yet another regurgitated exponent of the High-Street endorsed Indie(™) conveyer belt simply vanish.

Jagged of both riff and bone structure, P&TP could certainly fit into the grotty, Hollyoaks furrowed pothole inhabited by filth like The Wombats or, those utterly abominable rodent-boys, The Enemy. Yet rather than titillating the masses with disposable silence-filling tripe, this motley crew of whippersnappers have created a virulent slab of progressive sonics that pays its dues to the pantheon of great British tunesmiths without ever over tipping. For sure, dollops of Franz, Blur and Supergrass have been whisked into this epileptic mix of guttural, quick-witted punk-pop but_ Little Death _is no pre-packaged ready-bake; it’s an improvised, home-cooked palate-whetter, coated in rhythm and sprinkled with bite.

And bite it does, with ‘Come On Feet’’s steam-rolling kafuffle skirting away from the opener’s hazy soundscape, catapulting an ecstatic sprawl of dense, turbo-charged guitar jilts and ebullient hand-clappery into the spotlight. Nimbly mixed, this ragged sonic shower whip-cracks atoms to the beat of Johnny Sanders' rapacious drum-pummelling and it’s with such masterful sticksmanship that rabid cuts like ‘Lost In The Woods’ and - the blatantly chart-courting – ‘Mr Understanding’ transcend into hip-wiggling, knee-jerking triumphs; the sort that have dancefloors united in a fist-punching haze of ebullient, beer-frenzied euphoria.

The lyrical contribution can be tiresome at times, particularly during downtrodden tempo-creeper ‘Song For Today’ - where lethargic couplets are pilfered from age-old nursery rhymes - or throughout the entirety of Dry Wings’ desperate teenage-angst whining. But P&TP are infinitely more tonal than thoughtful, and in the gauzy fret-spindling woven through ‘Moving’’s rich melodic tapestry any grimacing is quickly chaperoned from mind as Tommy Sander’s hushed vocal guides the track onwards to the intricately decorated echelons of Field Music.

Despite such seductive endeavours, the surging cavalcades are what truly illuminate this terse affair and by climaxing with ‘Bright Lights’’ multi-faceted brilliance, Pete and his peg-legged assailants have pulled off a rum-smuggling masterstroke. A calming vocal séance caught up in a scurry of taut drums and hurricane howling riffage, the track’s Rakes-esque chromosome-chopping and city-slicking skulduggery encourages minds to excavate the turgid urban grind through a hedonistic stupor of frazzle-eyed scepticism.

It’s an instance of pulse-racing exhilaration that crowns a mesmerising record certain to thrust P&TP into the fore with raucous, accolade-breeding aplomb. And me? Well, I’m still here, tapping away to yet another spin of Little Death – Lord knows, I’ve got a lot of making up to do.