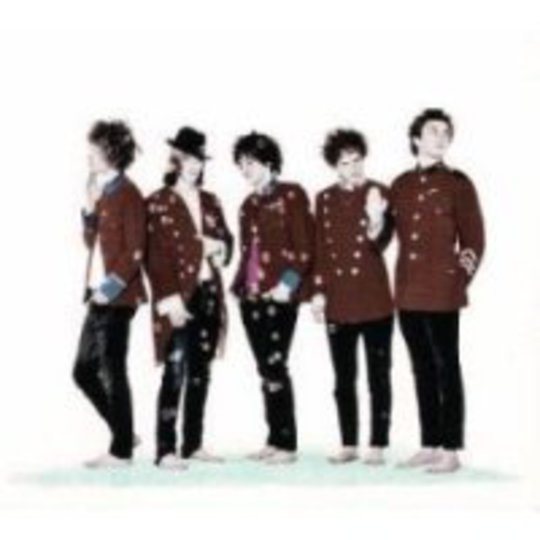 Reader, misunderstand me not. I, as much as anyone with an enthusiasm for music and discourse therein, am aware of the need for conflict and, in base terms, annoyance in popular music. Used correctly, excessively imposing sounds and statements can have a tremendous effect on the listener. Placed in the context of valid expression and worthwhile experimentation with the limits of tolerance, pop music can truly insult us for the better. Suffice to say, I think of myself (with my head quickly expanding) as having a moderately advanced appreciation for the value of the shock tactic.

It is with this mindset completely at its limits that my consideration of Yes, the debut record from some idiots called Oh No Ono who are probably going to be massive and have some goons kill me when they read this, begins. There's pop know-how aplenty, quirks of songwriting and enjoyable harmonies, yes. Yes. But there's also the most vapid excuse for a band behind it all. The cover shoot, for a start, pegs them as The Strokes looking commandingly at the hand they are about to pleasure themselves with, all soft focus and ridiculous trousers. Then you'll put the CD in, I expect, and you'll hear all that admittedly crafty pop music. But along with it, you'll hear the most nasal whine you're likely to come across this side of a mic’ed-up lobster as Diane Keaton tosses it in the pot. Singer Aske Zidore is annoying. And so is his band.

Rather than being annoying in the way we discussed earlier, this record and its creators are just plain annoying. The opening mood-setter 'The Strawberry Festival' strives for a theme, but doesn't quite make good enough use of its strong piano progressions. Any mood that may have been semi-created, though, is rendered obsolete in lieu of the first appearance of the band en masse. 'The Shock Of The Real' is shit-era Simple Minds with that voice ridiculously chiming overhead. The overly simple lyrical construct simply does not gel with the intricacies of the arrangement which, though terribly dated, is competent enough. None of it, though, goes any distance towards the valid application of their talents. Cod impressions of a bygone era killed off by The Darkness and Steve Brookstein, Oh No Ono are literally no different.

What tries its hardest to be a Sparks-esque 'workout' ends up as a flat plod of a nightmare of an epic proportion of a sleep. 'Ba Ba Baba Ba Ba Well Anyway' is literally as lifeless and unintelligible as its smart-arse title, 'Am I Right' attempts to pummel convincingly but instead ends up as persuasive as Britney's character testimony, and the closing 'Talking Lynndie England' can be noted as a limp and lazy attempt to round the album off in the way it began, to give it some sort of cohesive shape ("check these dudes out, they could be, like, an albums band!" the kids will scream) and to presumably endear it to an older audience. Man alive, listen to Devo or Polysics and hear this kind of attempted genius throwaway psychopathic pop with authentic annoyance done properly for once. No, Oh No Ono, no. No.