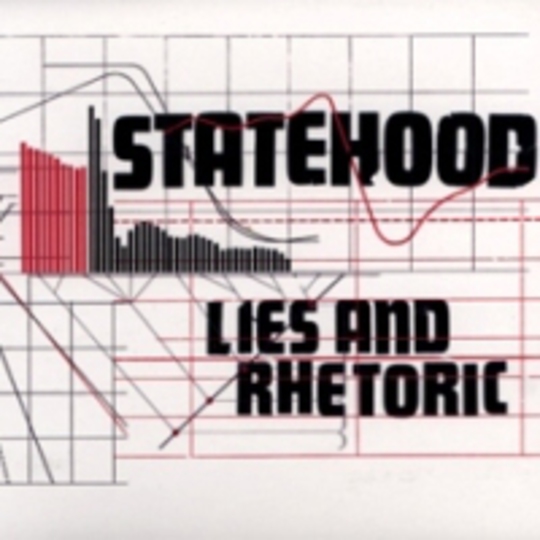 The first steps of any new project following the demise of a much-loved previous venture are always likely to be filled with trepidation; so much so in the case of Joe Easley and Eric Axelson, formerly rhythm section with the stupendously eclectic Dismemberment Plan, that it’s taken them four years to surface in a new incarnation after the Plan’s demise in 2003.

It’s not that they were nervous, though, just busy; Axelson, for instance, despite being one of the more ridiculously talented rock bassists of recent- scratch that, of any years, is now imparting the joys of Othello _and _The Crucible to High School students as an English teacher, while Easley learnt how to design aeroplanes as a graduate school aeronautics student.

Easley and Axelson are not the only ones in Statehood with a back-story though; singer Clarke Sabine was in DC secrets Motorcycle Wars, and guitarist Leigh Thompson is a lawyer during the day and previously did time in Plan associates Vehicle Birth; their songs too, although clearly fleshed-out by the entire band, initially came from Sabine’s pen and mouth.

Which means that Statehood are far from being an ego-driven rhythm section going all ‘jazz odyssey’ on us, as evidenced by some terrific night-sky guitar glitter in the right-channel partway through ‘Hidden Views’ courtesy of the generally incendiary Thompson.

For the most part Lies And Rhetoric is pretty straightforward DC post-hardcore, the lashes of guitars, impassioned vocals and breakneck tempos occasionally spiced with a touch of funk or dub, but it’s a caffeine record rather than a cannabis one; it hits hard, fast and direct, helped no doubt by production courtesy of another ex-Dismemberer, Jason Caddell, who has an ear for the sharp, the deep and the intense.

At times melodically reminiscent of At The Drive-In (although not lyrically; while there’s definite, defiant politic happening here there’s no “asbestos president” nonsense), Sabine’s vocals are perhaps occasionally a touch too Chester Bennington in the chorus, but this is a minor complaint and only really thrown into relief at moments when one recalls just how idiosyncratic and compelling D-Plan frontman Travis Morrison could be.

Highlights are plentiful, from the exciting, interlocking riffs of ‘Transfixed’ and ‘Still Spinning’, which falls into a truly beatific middle-eight two-and-a-half minutes in before climbing back to the moshpit, to the final 45 seconds of ‘Save Yourself’, when the song switches into scratchy, jerking funk and it’s apparent just how talented all these guys are.

The album’s peak undoubtedly comes with the downwards-slanting guitar shards, layered vocals and backgrounded porcelain metronome of ‘Every Single Question’, coalescing to make something that borders the psychedelic almost as much as the rocking, even as rhythms, both propulsive elastic, concoct a ringing and compelling groove that keeps the body moving even faster than the mind.

Statehood are an odd entity; educated, gainfully-employed men in their mid-30s raising as much of a riot as anyone ever has, and clearly loving every minute of it. Lies And Rhetoric isn’t quite enough to make you quit your day job, but it is enough to make it seem worthwhile.