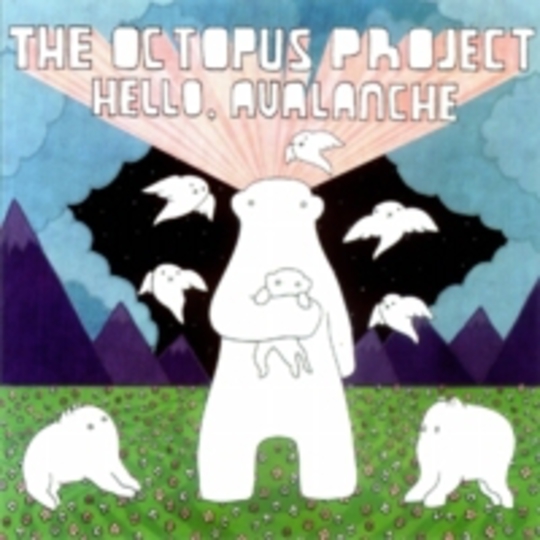 Instrumental music doesn’t seem like the hardest field to get into, but chances are it’s a tricky one to master. Stripped of a few of popular music's distracting factors – bushy-browed frontmen spouting their mad rhymes up to the rowdy choruses of each prospective hit, for one – the instrumental approach leaves little to hide behind, the tasks of avoiding repetition and encouraging variation becoming crucial unless you want the audience to be asleep and/or somewhere else by the time track two kicks in.

This balance is no easy one to strike unless you’re gifted with a talent for making grown men cry openly like Mogwai are, but Austin TX’s rarely-recognised trio The Octopus Project are ready to take the fight to boredom’s door with a third album full of instruments, techniques and time-signatures. Standing knee-deep in loops and programmed patterns, the instrumental electronica housed within Hello, Avalanche is some of the finest you’ll hear this year or next, chopping and changing from serenely soft to Nintendo pogo-pop between songs.

And perhaps the best bit about it is that it creeps up on you, the album beginning deceptively simply with xylophone and enchanting Theremin combining on ‘Snow Tip Cap Mountain’ to almost raise the body temperature with its blasts of comforting air and raising the oft-asked question, should it be possible for music to make you feel like you’re being dragged gently through a wall of still-warm jelly? Neither the sensation nor the simplicity last long enough for an answer to be argued, as ‘Truck’ arrives and brings with it a swerving guitar ‘n’ Game Boy art-rock explosion written in sixes, sevens and eights, alternating between beats in the bars set to an open hi-hat soundtrack, making its 8-bit exploits addictive enough to dance to and complicated enough to evade capture.

Whilst on occasion, weary ears let some underwhelming convention in to dampen proceedings as two or three of the more chilled efforts loop themselves into a trance that even a spell in the six-beat chair can’t free them from, Hello, Avalanche otherwise fascinates. Among the highlights, Yvonne Lambert’s layered Theremin leaves everything feeling warped into slow-motion during ‘I Saw The Bright Shinies’, whilst ‘Mmaj’ sees two melody lines do beepy battle for four minutes of what should be called tweelectronica but probably isn’t, which itself follows on from the calming sounds of passing traffic present on 'Upmann'’s loops after its apparent birth on someone’s front porch, the car engine sounds themselves becoming as natural as when some delicate inter-gender vocals finally appear for the all-too-brief farewell of closing track ‘Queen’.

And 'natural' is the word to best describe Hello, Avalanche, which becomes a testament to an outstanding design when you consider that most of the ingredients are, to some extent, synthesized. Concluding via a ridiculous simile, listening to Hello, Avalanche feels a bit like falling up an endless abyss at varying speeds, for reasons that just couldn’t be justified in a closing sentence.