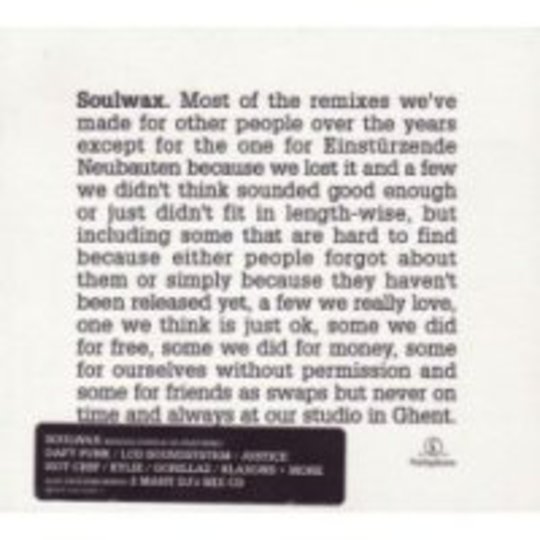 As well as fluttering eyelashes at whoever the hell runs the Guinness World Records these days with its apparently unprecedented 545-character title, this is a record fit to moisten the undergarments of those whose 2003 was soundtracked by the inventive and thoroughly danceable mash-ups and remixes of David and Stephen Dewaele’s As Heard On Radio Soulwax Pt. 2.

The principal talent of the Belgian brothers, and the main triumph of Most Of The Remixes…, is their ability to effectively freshen up even those most ubiquitous elements of our everyday aural wallpaper. A case in point is the opening effort, their excellent reworking of The Gossip’s numbingly overexposed ‘Standing In The Way Of Control’. Even though this Soulwax Nite Version extends over seven minutes, it never outstays its welcome. Rather than just bolting on a vaguely danceable beat and calling it a day, the Dewaeles succeed in finding an exquisite balance between providing genuine twists on the source material, furnishing it with new textures and leading it down paths unexplored by the original, yet all the while exploiting the listener’s familiarity with the song - a most agreeable combination of old and new. See also the takes on LCD Soundsystem’s ‘Daft Punk Is Playing At My House’ and Klaxons’ ‘Gravity’s Rainbow’, where the added sirens and grinding synths, buttressed by the familiar vocal lines, are allowed to spiral and whir with abandon, producing end results which far exceed the originals.

There’s a wry intelligence to the fine takes on Kylie Minogue’s ‘Can’t Get You Out Of My Head’ and Sugababes’ ‘Round Round’, as standard indie remix protocol is turned on its head. Where one would usually expect to hear guitar-based tracks being made over into pop/dance records, here we have pop/dance records transformed into female-fronted synth-indie numbers. There’s a wider point to be made here about today’s Venn-diagrammatical mainstream, with the confluence of pop and the supposedly alternative, but there’s a time and place and this ain’t it.

An honourable mention must go to the brilliantly playful and skippy reworking of Muse’s ‘Muscle Museum’. In a trick reminiscent of the Aphex Twin’s rendering of David Bowie’s ‘Heroes’, the vocals are stripped of their original accoutrements, bringing their great dexterity and passion to the fore. The album’s unlikely highlight, though, is the Soulwax Ravelight Dub take on Robbie Williams’ ‘Lovelight’. A gold star, of course, for all but removing Burslem’s favourite son from the equation - in his place is a veritable cacophony of bleeps and electronic grunts. It’s superb.

Entirely appropriately, the Dewaeles don their 2 Many DJ’s garb for the second CD, where they provide a continuous 59-minute mix, encompassing elements of CD one’s tracks (sans Muse), and throwing a handful of others in for good measure, most notably repeating the Kylie/Sugababes trick for Ladytron’s ‘Seventeen’ and giving over a full five-and-a-half minutes to Hot Chip’s ‘Ready For The Floor’.

If you’re after inventive, danceable remixes that still remain faithful to the original material, it doesn’t get much better than Soulwax, and Most Of The Remixes… comes highly recommended.