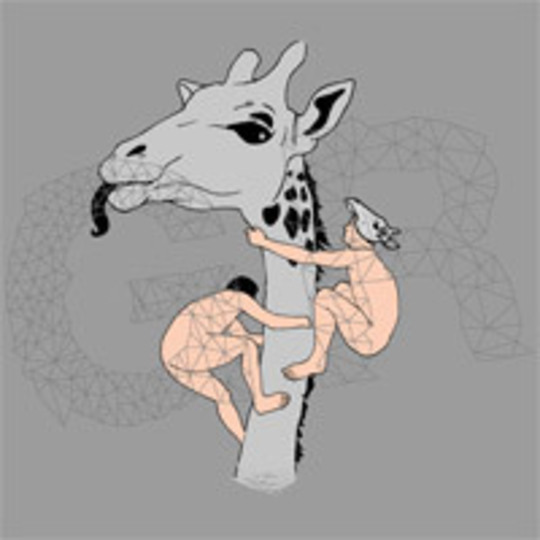 Everyone sat down? Context is everything with Giraffe Running. Recorded at the end of 2003, broken-brained broken-beat duo Greg Barrett (bass) and Hag (drums) produced five initial instrumental compositions. Jolting from one bass string to another, Barrett’s meandering fret lines are fingered with jerking precision, sliding one direction, changing gears, and awkwardly crawling up another. Once gnawed at, Giraffe Running then spat out their tumbling avant-garde disorder in the direction of an array of equally oblique musicians, from Ian Williams (Battles, Don Caballero) through to Ichirou Agata (Melt Banana). Though perhaps over-reliant upon the concept that lies behind it, Giraffe Running makes like Chinese Whispers between hollow-headed children and ensures that the relatively freeform compositions are thoroughly lost to the wilderness.

As five seismic panic attacks, Barrett and Hag's original recordings collide over 25 minutes and passes as oddly compulsive despite being thinly dressed. The opening riff to 'Shoot The Newt' is ravaged and regurgitated throughout in various vastly distorted guises as each track reiterates the same curtailing bass lines, continually retaining a sense that it is all going to fall apart at some point as tumbling military drums collide with Barrett crumbling bass like a wasp and bumblebee locked in a mid-air conflict. 'Chewing On Eggshells' clatters like Lightning Bolt on a come-down, more on-edge and bluntly delivered than the previous flutter. But as things drift, Giraffe Running builds up an awkward canter, crashes over and comes to a close.

Everything seems quite erratic enough. Not for Giraffe Running, though. Like gannet vultures picking at a leprosy-ridden corpse, Collaborations picks at the choice cuts and makes off. Completely lacking much in the way of coherence, the assembled collaborators meddle and warp the initial recordings into their own. But the root of Giraffe Running remains identifiable with 'Shoot The Newt’'s repeating riff continually rearing up. Slowly sloping in, it begins with 'Sharp Light' with Groom's Mike Stephens' pining vocals and classical guitar contribution over the now familiar disrupted drones of Barrett and fractured skins of Hag, both further distorting events. Each track shifts the original compositions further out of their groundings. Though Eion Dillon's lovelorn Celtic conception is particularly skewed, and Agata's shrieking noise on Feline In Full Effect' a long place from home, each track gets snatched and taken away. Whether they end up as slow-burning jazz ('The Second Wave'), simply erratic ('Shafted By Light'), or washing over with Max Tundra and company's meandering interpretation ('A Vaguely Distant 'Oh Yeah'...'). Everything is brought to a head with something resembling atmospheric with 'Lionisation of The Squishy Hoops'. After fifteen tracks of reiterating riffs it is all ill-fittingly unpleasant, but vaguely arousing.

Though little more than a documentation of how to take an idea and run with it, Giraffe Running is largely irrelevant outing. But from the packaging, designed by Matthew Bolger (from fellow Irish experimentalists Redneck Manifesto) and hand-printed by Jeff Mueller (of Shipping News renown), through to the concept of the project, its insistent ambition is inspired. Whilst there is little to arrest, there is plenty of headache-inducing intrigue.