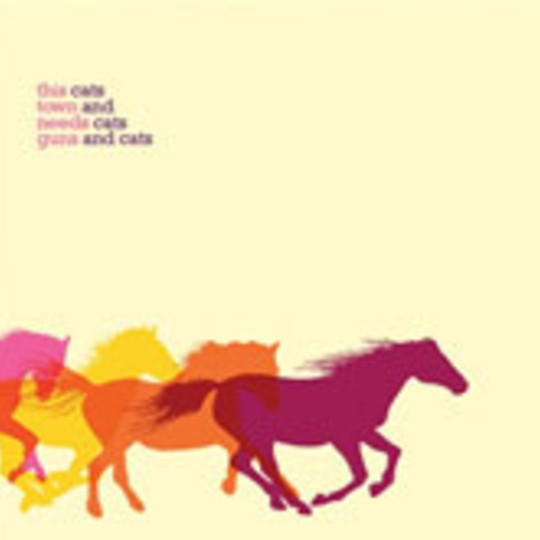 Even music journalists get it wrong on occasion (sorry to disappoint you). This naive reviewer will admit to previously slating Cats and Cats and Cats as “just another post-rock band” with another overwrought crescendo. These views were spurious, misinformed, and oh-so-wrong. Anyone who has listened to Cats and Cats and Cats (who, from this point onwards shall be more simply known as Cats) beyond a 30-second snippet will attest that such a summarisation really couldn’t be further from the truth. Post-rock has become a criminally un-cool tag, but this split LP with Oxford quintet This Town Needs Guns should defer the notion that Cats are just Mogwai with a chorus.

The evidence is plain to see. ‘Brilliant The Brilli Ant’ (geddit?) starts their side of this collection with a zig-zag of acute guitar pop and keyboard-assisted sing-alongs, proving that they have as many surprises up their sleeves as they do tunes. Cats want you to believe their music is the soundtrack to countless bouts of choral drunkenness, the musical culmination of everything good you can say about Mew and Arcade Fire – not the soundtrack to a looming apocalypse. The brilliant vocal chord change in ‘Sweet Drunk Everyone’ confirms this. Overwrought crescendos? No chance.

Elsewhere, the unrequited bombast of ‘Anchoress’ executes a symmetry of rapid-fire guitar pop and fine choruses with hardly a second of respite. ‘Tower Tower’ extends its brilliance to nine minutes with the kind of explosive epochs as played out on Battles’ Mirrored.

It pains me to say this, but I envy the grey backdrop of Staines for inspiring this young act to get off their arses and make some damn-fine music. They could have just followed in Hard-Fi’s path and written about a cash machine. Hip hip!

Whereas Cats have only just begun to show their true colours, their LP neighbours This Town Needs Guns have been hitting bull’s-eye for over a year and are surpassing themselves with every release. With the finest shades of American emo and Morrissey impressions (seriously, check out ‘26 Is Dancier Than 4’ for the proof) in check, they’re sure to rise from the west country pubs in which they currently reside, and onto bigger things. I’ll bet money on it.

You could level the criticism at them that all their songs sound alike, but you’d be wrong, plain wrong. Y’see, it’s all in the detail: this isn’t the down-tempo band of the last year’s sold-out single ‘Hippy Jam Fest’; This Town Needs Guns have brought out an abundance of energy and ideas to match their ever-growing fan-base. Take, for instance, LP closer ‘It’s Not True Rufus, Don’t Listen To The Hat’. It may wander around the same guitar noodling and heavy emo vocals for a couple of minutes, but come the song’s dramatic finale they’re firing machine guns with an attack of unprecedented guitar sludge. If you’re new to This Town Needs Guns, this is the best place to start - they’ve revised their sound to near-perfect levels. Hooray!

Flick back through a few pages of British rock’s history to the early noughties and you’ll find the scene in a state of decay. Its only hopes are stunted by over-exposure before any proper release, and ultimately fall victim to their own hype. Hundred Reasons, Reuben, Kinesis – all united in falling short at the first hurdle. With more ideas than an idea convention, a new-wave of British rock bands (see also: Meet Me In St Louis, Rolo Tomassi, and a good dozen more) are paving the way for a renewed period of musical optimism. Here, you’re looking at two of the finest.