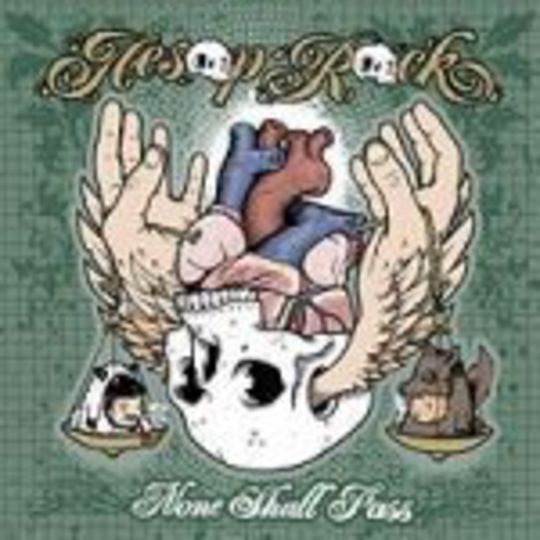 If the old cliché about wood and trees has any credence, it can certainly be applied to Aesop Rock and his native New York City. Having switched coasts away from the skyscrapers, Ground Zero and that semi-fictional smell for the first time in his life, None Shall Pass envelops the sounds of hip-hop’s spiritual home more than any album in his notable career.

It’s a career that’s undulated confusingly, too. While über-indie fans will blather about underground classic Float representing his most essential record, in reality 2001 Definitive Jux debut Labor Days was the true announcing summit, coalescing distinctive timbre with a compelling conceptual vision. Two years later Bazooka Tooth over-egged a complex, dense soup of trademark intelligent lyrics and thoughtful beats until it became unsatisfyingly stodgy. The Fast Cars, Danger, Fire And Knives mini-album saw a return to the cutting edge and, on that form and discounting a Nike workout soundtrack anomaly earlier this year, Ace Rock was due a bum hand once more.

Not so. None Shall Pass will take its time. But as anybody fond of the real gentleman’s tipple – Guinness, ta, or its extra-strength import for those who prefer hair on their genitals – can probably paraphrase, the best things are worth a wait, yo.

That aforementioned NYC atmosphere won’t take long to settle, however, although don’t focus too hard on reliably clever couplets, withering put downs or partially monotone rhymes. Instead, listen up for Big Apple backdrops. Aesop is never less than equal to his accompanying production – chiefly split between his own behind-the-boards work and that of long-time collaborator Blockhead – yet for one so wordy this is the point where the music finally becomes as consistently interesting as his flow.

So to the New York-isms: ‘Keep Off The Lawn’ struts out the traps with downtown swagger; the title track speeds up samples with soul-minus-slush intent that would have Bronx-born legend Pete Rock cocking an ear, pondering if this is what he’d be creating in another life.

There’s better to come. As ‘Getaway Car’ revs up its opening bars, Ghostface could be sat in the passenger sear ready to wrestle the controls, horns fit for the Wu-Tang, or at the very least a lost cut from Danger Mouse and MF Doom’s kick-ass DangerDoom LP. And as Def Jux homeboy Cage wades into the fold – his debut album for the label might have been relatively lukewarm, but few rip a cameo verse better – the dynamics of supposed ‘golden age’-aping rappers stood stationary in Jurassic 5’s concrete schoolyard are rendered redundant. For many listening today, their golden age will be the independent boom of the 1990s that spawned a new generation of fucked-up wordsmiths popping taboos like so many pills. It sure beats reminiscing about ‘back in the day’.

Soon afterwards ‘Gun For The Whole Family’ is raining down exactly the kind of apocalyptic left-hop you crave from Ace; his Def Jux paymaster El-P produces, continuing a peerless vein of form from I’ll Sleep When You’re Dead, 2007’s greatest rap set so far, bar none (although run close by the genius of Clipse’s drug-pushing, blog-pleasing Hell Hath No Fury).