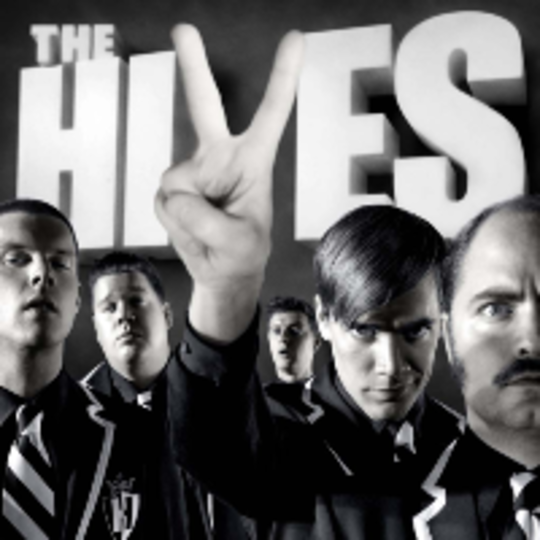 Wait… sorry, but did he_, the Walking Gob that is Howlin’ Pelle Almqvist, just state for the record: _“They say the definition of madness is doing the same thing and expecting a different result”? He didn’t? Oh, okay.

Moving on: The Hives’ fourth studio album finds the Swedish five-piece in predictably cocky form. They’ve a song here called ‘T.H.E.H.I.V.E.S.’, one of a pair produced by Pharrell Williams, that features the line, “We rule the world, this is our world”. All a fun ‘n’ games role-play exercise, or misguided self-confidence? Throughout the band’s in-the-mainstream career to date – thanks, Poptones – it’s never been totally apparent where fantasy blurs into reality, and The Black And White Album’s larger-than-life cover art and atypical swaggering braggadocio only compounds this confusion. It’s a pop-rock album made by robots, but are these robots of flesh and blood – drones controlled by a higher power – or of design more sinister?

Certainly ‘A Stroll Through The Hive Manor Corridors is really rather eerie and unnatural, not at all like you expect filler on a Hives LP to sound like. It’s Scooby Doo incidental musak given a neat sheen by sci-fi studio wizards. They’ve written instrumentals before, but nothing quite as left-of-centre, or rather wide-of-expectations, as this. Wait, again: they? Isn’t this all the work of one Randy Fitzsimmons? Who’s found here aping The Stooges one minute, The Stroke the next? It _is_? Oh, okay.

Moving on: The Hives’ lead single here, ‘Tick Tick Boom’, doesn’t stand out particularly as being neatly representative of its parent LP as a whole, but its sentiments – hard, fast, now; time’s ticking and you’re a sucker for clock-watching – echo throughout The Black And White Album. Leaping from itchy-pop to adrenaline rock, the five-piece never pause longer than to take a breath before plunging right into proceedings. When the album does slow, such as on ‘T.H.E.H.I.V.E.S.’, it doesn’t feel right – working with the in-demand Williams was no doubt an interesting experience for all parties involved, but the products here pale in comparison to the explosive Dennis Herring-produced likes of ‘Try It Again’ and ‘Square One Here I Come’.

Wait… sorry, back to square one to try it again? What was that definition of madness again? He _did say it? Fucking hell… I could have saved myself the effort of writing some 350 words.