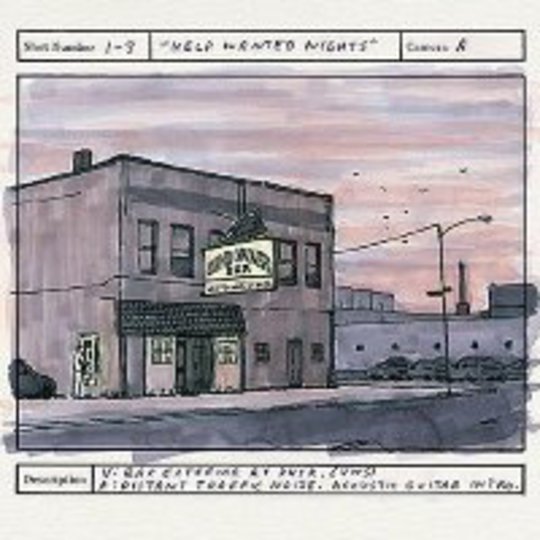 There's rehashing the past because you don't know any better, and then there's taking frameworks from the past and splicing yourself respectfully in there while everyone around (usually fans of the output of Bella Union) says things like, "Yeah, it's kind of like proper country music, the sort of thing I could see my dad liking… but that's not a bad thing! Ha!" (sips pint of Staropramen, turns attention to ironic Springsteen tribute act setting up at front of venue while celebrating 33rd birthday). Luckily, sort of, The Good Life's Help Wanted Nights fits comfortably into the second slot. Their inoffensive and actually quite likeable country pop bobs along quite happily (and at times gracefully unhappily) like a "no prog, thanks" version of Decemberists.

As for rehashing, Help Wanted Nights conjures a sweet atmosphere of a highway in ‘70s mid-west America, maybe with some gypsies camping on a hill. Bouncing acoustic guitars and Tim Kasher's to-die-for vocals - think the Fruit Bats’ powerful melodic drive - harbour lyrics of decisions, of difficulties and occasional misery. What's the only way to combat the wrongs you've visited on your loved one? "Pour me a drink, and don't pour it too weak," according to the lilting opener 'On The Picket Fence'. Such allusion to weariness could, in the wrong hands, just be a pathetic cry for help that inspires nothing but the thumb's gravitation to standby. It's not, though. Don't worry.

Similarly, the Tarantino-shooting-up-scene-chic of 'You Don't Feel Like Home To Me' has the sadness of a Nick Drake lament and the necessary instrumental finesse (enjoy that skiffle-lite drumming and hear it morph into light funk). Gently evoking the scene of a grubby affair through descriptions of the back garden and the rotten sheets, Kasher treats us to real minutiae leavened with the necessary subdued emotional clout to make it believable. When it finally erupts about thirty seconds from the end, it's a hollow epiphany that's usually the preserve of Darren Hayman's last shag in the city. The crowning achievement of Help Wanted Nights, though, is the concluding song, 'Rest Your Head'. It’s the only real step outside what of you might call The Good Life's 'comfort zone', an epic country smash-along that, when it changes gears, becomes irresistibly positive. As Kasher wails, "it feels like love". A psychopathic and oddly balanced guitar solo, the likes of which will probably be seen on the next Yo La Tengo record, backs up his words.

So, far from rehashing in a genre where that danger is always lurking, The Good Life remain reasonably fresh. A few more steps towards something else might be welcome, but for now their poise and position is utterly lovable. They've the craft and intelligence to last in the vein they're coursing through but, should they branch out, they could become fantastic.