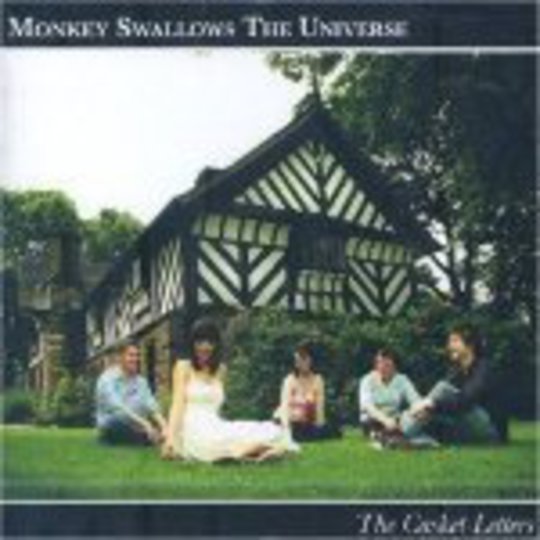 Such is the great delicacy and high sensitivity of The Casket Letters, the second album from Sheffield five-piece Monkey Swallows The Universe, that when singer Nat Johnson proclaims on penultimate track ‘Paper, Scissors, Stone’ that “It’s all just sex and drugs and rock and roll,” it’s enough to send the listener quivering in his corduroys. Yet once Johnson qualifies that bombshell in her next line – “The only difference is that we don’t have to do them all” – not only does it all suddenly make sense, it also serves as a mission statement for the band. MSTU are defiant in their eschewal of the debauchery in which most beat combos feel obliged to partake, choosing instead to ruminate on science, time, ghosts, love and Grand National-winning racehorses.

Fittingly, like a beautiful shy girl at a party, it’s the most unassuming tracks which are the most alluring. Opener ‘Statutory Rights’ is a wonderful scene-setter; a minimal moonlit tale of love overcoming the odds. ‘When The Work Is Done’, meanwhile, rounds the record off exquisitely, its languid tenderness evoking summer afternoons of tree-climbing and gentle romance.

It may be a case of trying too hard, or perhaps of buckling slightly under the pressure, but the record’s more obvious standalone cuts unfortunately don’t match up to this understated brilliance. The singles already taken from this album demonstrate the point well – ‘Science’ promises much but is spread too thinly over its five minutes, while ‘Little Polveir’ is a typically pretty yet ultimately fairly inconsequential effort.

The band have opined that The Casket Letters demonstrates a wider range of material, which is fair, yet it still rarely strays from the trademark template of delicate acoustic guitar and gently lilting vocals. The breezy pop of ‘Matterhoney’, for example, comes on like a more shambling version of Camera Obscura or Belle & Sebastian. In accordance with the patronage of Loose Records, ‘Ballad Of The Breakneck Bride’ is a country-ish duet, casting Johnson and guest Rhys Edwards as doomed lovers. The template is cast aside on one occasion, though, as ‘Elizabeth & Mary’, based on the acrimony between Queen Elizabeth I and Mary, Queen of Scots, sees the band showing their teeth and coming on like modern-day Morrissey. It’s the record’s title track of sorts, the album taking its name from the series of incriminating letters allegedly written by Mary, declaring her complicity in the murder of her husband.

Despite all that is great about this record – Andy George’s wondrous cello, Cate Tully’s heart-rending violin, Johnson’s tender vocals and occasionally deft lyricism, the sheer grace and poise of it all – there simply aren’t enough killer tunes for it to rank amongst the year’s very best. But to even be thinking in those terms demonstrates how much there is to enjoy here, and how MSTU could have it within their power to produce something truly special. Next record, maybe.