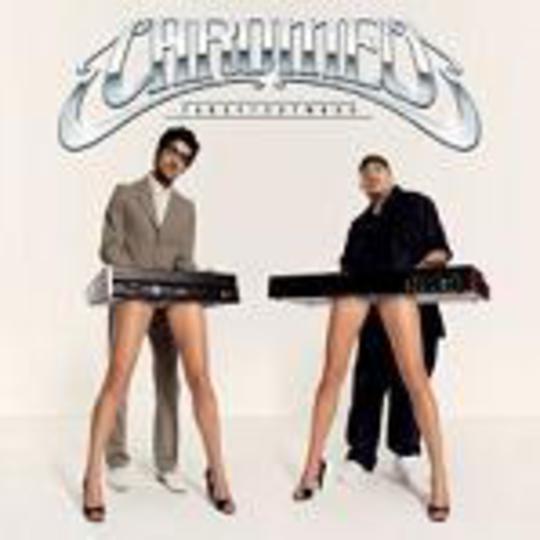 With ol' funky pixie Prince all over the press right now – perhaps you’ve heard a little something about his new album coming out exclusively through Sunday’s Mail; presumably he’s never read the thing – and pop-licked and retro-synth’ed dance music (see: Justice, SMD, Digitalism) charging chart-wards, the time is right for an act to mix some of the former with a lot of the latter. Step forwards Dave 1 and Pee Thug, a.k.a. Chromeo. Regulars on the festival circuit this summer – they’ve recently been added to the bill for London’s Field Day, and DiS has already caught the pair at both Primavera Sound and Hove – the duo are a live delight, mixing funk guitar with vocoder vocals and percussion to keep a statue’s toe tapping. But, does the fun of Chromeo’s live set come through on this, their second LP?

Of course it does, silly. Like !!!’s Myth Takes of earlier this year, Fancy Footwork is an album guaranteed to get any house party started. With all the lyrical depth of a toddler’s first paddling pool, it’s not a record to challenge the grey matter; rather, it’s a persuasively pulsing masterpiece of beats ‘n’ peaks and pieces and chops, the sort of collection you shouldn’t like – and you actively try not to through the first couple of listens – but once Chromeo take hold of your senses, you’re powerless to prevent the shaking of all dangly bits on your body.

The title-track lead single summarises what’s on offer in a neatly succinct three minutes: vocals that say nothing, really, but do so really confidently; a bassline that skips and bounces as if in moonboots; and sweeping whooooooshing_ noises and alien bleeps that dance deliriously over the top of everything while an android dominatrix congratulates our protagonist’s fancy footwork. On paper Chromeo are a shrugged-shoulders ‘so what?’, but when flowing from stage or home speaker cones, their funk-fuelled clap-alongs are perfectly addictive. See also: ‘Bonafied Lovin’ (Tough Guys)’, where our hero bizarrely promises to deliver the kind of TLC that’ll make him feel old, and the brilliant tongue-in-cheek diss track of ‘Momma’s Boy’, which is somewhere between Cher’s ‘Believe’ and ‘Pretty Fly For A White Guy’ via Blink-182’s rhyming dictionary. Yes, on paper it sounds crap. But, really and completely inexplicably, it’s not.

Of course, it helps if you sink a few pints of homebrew prior to playing Fancy Footwork, but if you’ve the merest semblance of fun in your bones you’ll eventually take to it heavily. It’s nothing revelatory, nor will it rank as one of the year’s finest long-players from an artistic perspective, but who cares? It’s F to the U to the N to the _buy it now. Which is something that can’t be said for Prince’s newbie, Planet Earth: you don’t have to buy that at all, just steal it from inside its awful ‘paper housing.