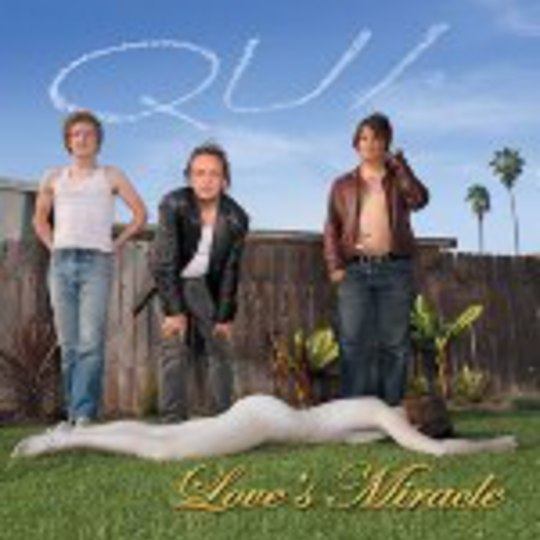 In the nine years since The Jesus Lizard’s split little has been seen in the UK of the band’s iconic front man, the inimitable David Yow. Aside from a handful of appearances here with legendary sludge masters the Melvins, Yow has kept an un-characteristic low profile. If anything his absence has only fuelled the man’s legend. Anyone who caught The Jesus Lizard live back during the gold rush of the grunge days will undoubtedly have been bowled over by the strength and un-predictability of the band and Yow’s performance. The man took crowd surfing to an art form, destroying the imaginary barrier between performer and audience (and sometimes venues air conditioning appliances in the process) and receiving the occasional ‘cold cock’ knockout punch for his trouble.

So_, when news started to filter through from the US that he had hooked up with Los Angeles drums-and-guitar duo Qui, tongues started wagging about which label the now three-piece would hook up with. Eventually, after the act released a single on Los Angeles-based Infrasonic Sound Recordings and following a wee bidding tussle, Ipecac secured the band’s services long term. Live performances at the Supersonic Festival in Birmingham and the Barfly in London saw Yow lose his passport as well as his shirt, and delivering a typically erratic, whirling dervish spectacle of a show. It’s with some excitement, then, that their _Love’s Miracle was received in the DiS office.

When the album bursts open, with the metallic thump of ‘Apartment’, one is left wondering if this is indeed Yow singing at all! His sweetness and light, high-pitched vocals clash against a Dale Crover-like drum rampage and squealing feedback-drenched guitar. It works, of course, and it sets the tone for an album which, whilst pushing all the right buttons, weaves every which way it can. The songs are pulled so taut you feel like they could snap back and break apart at any time. The charmingly titled ‘Gash’ has a chorus where Yow repeatedly chants “Smackhead” over an Andy Gill buzz-saw riff. We’re not a million miles away from Jesus Lizard territory here, but if anything guitarist Matt Cronk is more tied to the blues, as their cover of Frank Zappa’s ‘Willie the Pimp’ shows. Yow does his best to channel Captain Beefheart’s growling vocals.

On the album’s original tracks, Yow still seems perversely fascinated by the odd minutiae of conversations and the under-side of ‘everyday’ life. He seemingly takes the role of a cross-dressing psycho on the track ‘Today, Gestation’, asking of the little black dress he’s sporting, “Hey does this make me look chubby?” Lady replies: yes, it does. Oh to spend a few hours inside of the mind of David Yow!

The album ends in suitably perverse form with the band running through a surprisingly faithful rendition of Pink Floyds 'Echoes' from their 1971 progressive-rock classic Meddle. Love’s Miracle is an oddly enjoyable affair on the whole, although in a time when US bands are working through a Fantasy Football League-like transfer system (I’ll swap your an ex-Jesus Lizard singer for a Helmet drummer), it may take an album or two for them to completely work out their sound. In the meantime: catch them live when you can.