We'll Live And Die In These Towns 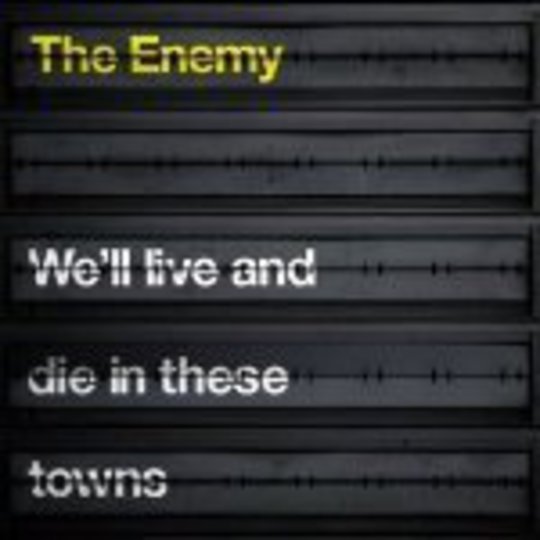 Roaring out of Coventry’s dismal suburbs with a chip on their shoulder and a not-entirely unpredictable distaste for rat-race subserviency, it’s little wonder The Enemy have drawn praise from the likes of Manic Street Preachers’ rent-a-gob Nicky Wire. Wire made plain his approval following the band’s recent support slots on the Manics’ UK arena tour, and you can see where he's coming from – The Enemy might lack the provocative political posturing and sheer feckless ambition of a youthful Manics, but they do share an empathy with the staid trappings of life in a cultural backwater and contempt for its numbing pleasures.

Thing is, they don't really get beyond a few well-worn clichés. Title-track and obvious centrepiece ‘We’ll Live And Die In These Towns’ doesn’t so much betray their roots as a Jam tribute band as hang giant neon baubles on the fact, with its over-egged imagery of “dirty dishes from a TV meal that went cold from the wind from a smashed-up window” spilling over into unwitting parody. That it still ends up being reasonably affecting is testament to the band’s essential likeability, but it’s not enough to escape the feeling that We’ll Live And Die... is a record that’s worryingly lacking in presence or character. There are anthemic choruses smattered liberally throughout, but they’re often at the expense of detail, and the band’s attack verges on one-dimensional. Admittedly, the slick production doesn’t do them any favours – ‘Pressure’ is a decent enough song, but would simply sound better played badly at double-speed, on a crappy recording.

The Enemy reserve much of their bile for the futility of the working week – ‘cause we haven’t heard that one before – with frontman Tom Clarke boasting that “promotions ain’t my thing / name badges just are not interesting / It’s much easier for me, see / To stay at home with Richard and Judy” on the irritatingly hooky ‘Away From Here’. Fair enough, but if it’s routines you object to, why persist in making records as two-feet-in-the-past generic as this? After the charmless-offensive one-two of this and sub-Kasabian glammy stomp ‘Aggro’, the record admittedly hits its moderately underwhelming stride. ‘You’re Not Alone’ half-inches the see-sawing rhythmic drive of Arcade Fire’s ‘Rebellion (Lies)’ (it’s fast becoming a rock staple) and runs with it, a climactic refrain of “There’s just too many dreams in this wasteland for you to leave us all behind” hitting its target, while wannabe epic ‘This Song’ overreaches endearingly. And ‘Pressure’ is a throaty, gloved fist of a tune that brings to mind prime Cooper Temple Clause.

But hell, even that’s damning with faint praise. With their unflagging belief that they have successfully escaped the 'system' they pour scorn on, and are now 'sticking it to the man', The Enemy chunter along with the premature complacency of a film noir private dick who thinks he’s solved the case, but is actually about two or three revelations from discovering the shocking truth. Trouble is, and here’s the rub – I’m not sure The Enemy have any more epiphanies left in them.