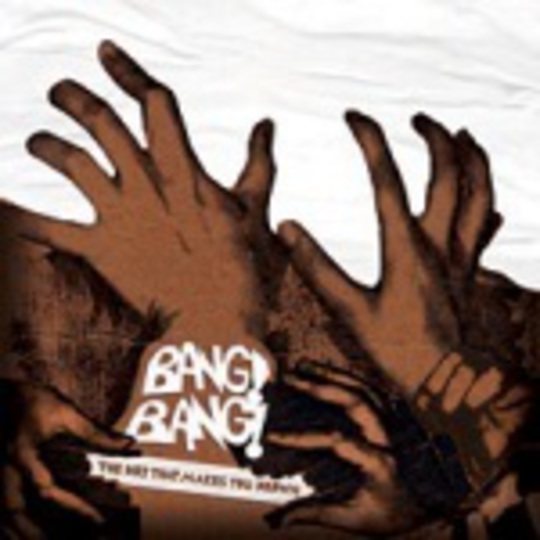 ‘Sex rock’ is what Bang Bang offer, in their own words. Yet I am left scratching my head when attempting to visualize what such a description could actually involve, short of the band in question literally dropping trowels and giving it a go mid performance. I am not sure if this quartet from Chicago performs such lascivious acts onstage. I’d hope not.

This type of behaviour would be the only reason to warrant such a banner because, musically, the sexiness escaping this dance-punk sounds so blatantly manufactured I feel as if I’ve paid for each melodic lick and glob. I do sense excitement in this collection, as there is a steady amount of screaming, shouting and getting all in a huff, but this music is not dripping sex. Instead it reeks of stale make-up, leathery studded belts and, if sex comes into the equation at all,_ bad _sex.

Parts of this LP prove to be worth dancing along to, at least in some sort of sarcastic, cool-than-thou You Say Party, We Say Die manner. The Rocky Horror Picture Show-influenced ‘Prefab Nation’ is passable, even though the dance-punk infecting its melody sounds awfully constructed, probably in an attempt to come off as the flavour of the week. Yet, to shed some contextually positive light, in these cases the intention of the band must trump my thoughts of its quality. In that case, Bang Bang succeed – they set out to emanate whatever is popular, and as such make a jumpy, happy, catchy record. Yet a year or two from now this music will become stale, very stale. Saying that, there are some positive elements afoot, and being the positivist, let's highlight them, despite none of them being sexy whatsoever.

The brilliantly titled ‘I Could Die’ departs from the formula enough to sound interesting, as the back beat prompting everyone to go crazy all the time takes three minutes off leaving dark, surprisingly interesting stuff behind. A cloudy vocal duo from boy/girl tag team Jack Flash and Gretta Fine - note the ridiculous names - is literally glam; melancholic and melodramatic, an assuring treat. Rhyming off the title with tales of cemeteries and all that is morbid works here, creating a gem of a song, a true diamond in the rough. The rest of the collection, on the other hand, simply tries too hard.

The tattered light is switched right back on and shined in my face during the next song, the cheerleading manifesto-cum-interlude, ‘Let’s Ride The Blue Line’. Some sort of dance ode to surf rock, this song ruins whatever its predecessor accumulated, reverting back to the cheery, bouncy and ultimately fake ethos shrouding this release. ‘Liar’ follows, another track bereft of sexiness that does nothing to sway me towards anything worth banging. Disappointing to say the least.

Therefore, the darkness and true glam intrinsic in ‘I Could Die’ is an anomaly, judging by the rest of this release that I have begrudgingly sat through four times now. Yet, there is a silver lining here. Sex does sell, and as a result, its odour may turn hoards of pre-pubescent emo kids onto Bang Bang. Regardless, that makes my stomach churn. We do not need more of this stuff crowding the airwaves. We already have bands telling us to scream, go party, die, stop,_ whatever_; the last thing we need is this.