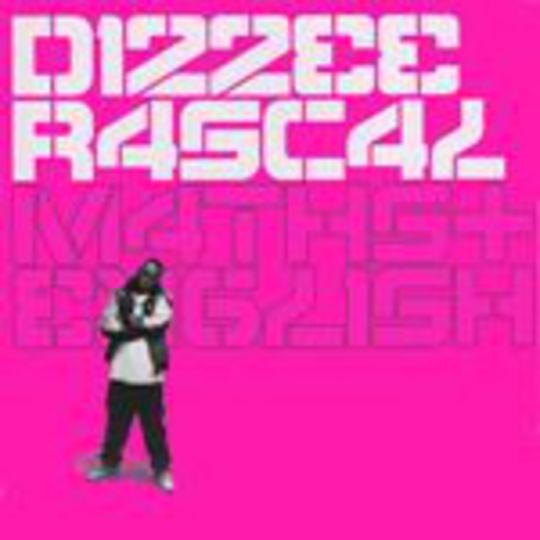 Age, it seems, mellows our Dylan none. Only 22 he may be, but this is album three and clearly the rapper MC known more commonly as Dizzee Rascal still has a raging fire deep within his belly, tickling the back of his tonsils and irritating his every uniquely raspy couplet. Maths & English is not a comfortable, play to please the mainstream LP; it’s an often vicious piece of work that rarely takes a step away from the face across its 14 tracks.

Skipping over the droning, monotone-delivered ‘World Outside’ – essentially an apology-cum-excuse for our Dylan ditching his mates round Bow way for the bright lights of world tours and backstage sequined two-pieces and all that bling tat – the album explodes into life with the rave keys and sampled hoots of ‘Pussyole (Old School)’, which comes apart at its fraying seams just in time for the sirens of, coincidentally enough, lead single ‘Sirens’. Heavy drums and crunching nu-metal guitars lend the song a slightly dated feel, but Dizzee’s wordplay is as fierce as followers faithful and fair-weather alike have come to expect. It, like rather too many of Maths & English’s songs, suffers rather from an uncomfortably OTT tone of braggadocio – while we’re not doubting Dizzee had it tough out east, screaming “I’ll break the law, I will never change” is, probably, a bit silly. Mate, you’ve mad cash these days – forget about risking a stroll through your manor, take the fucking armoured estate instead.

It’s the amusingly quirky British quips that prevent Maths & English’s lyrics from descending into a suffocating pit of US rap stereotypes – yeah, yeah, Dizzee’s all ‘G’ this and ‘street’ that at times, never more so than on the far-too-long ‘Where’s Da Gs?’ (guest raps from Texan duo Bun B and Pimp C are entirely inessential), but lines stating that his life “ain’t nothing like _EastEnders” and opening couplets like _“Liar, liar / pants on fire” (on the aforementioned critique of television Gs, full of hype and battle raps but with no grounds for their aggression) ensure that the listener’s never completely alienated by Dizzee’s predilection for a culture that’s far from native to the streets of E3.

Maths & English’s mid-section slump is something special, for the wrong reasons obviously: it’s never totally clear whether ‘Suk My Dick’ is recorded with all participants’ tongues firmly in cheek or not, but it’s a cack tune whatever layer you choose to settle atop the song’s surface. That said, it features, for apparently no reason whatsoever, a brief blast of ‘Yankee Doodle’. A sly nod to the various Americanisms that creep, far from subtly, into Maths & English? Could be. ‘Bubbles’, too, borders on lyrical embarrassment: Dizzee’s designed trainers for Nike and we don’t hold it against him, but a song about them? Give it a rest, fella. “Nike Air bubbles on my feet looking fresh”? Oh dear. “No matter where I am, I’ll always be the real deal…” For sure, lad, just as long as some massive, minimum wage-flouting (allege) corporation has dressed your tippy-toes first.

A pair of collaborative tracks close the album – a final slice of steel-on-iron anger-rap by the name of ‘You Can’t Tell Me Nuffin’’, which serves as a back cover to ‘World Outside’’s front, aside. ‘Temptation’ finds Arctic Monkeys’ Alex Turner’s delayed vocals drifting ghost-like beneath overpowering buzz beats, while stabbed-at guitars recall the AM’s own material. Which this song is, sort of. Dare we suggest the AM’s version is better, too? We just might. The following ‘Wanna Be’ features the mercifully sweet tones of Lily Allen, and represents a rare moment of lightness on an album of oppressive atmosphere and aggressive rants. “That chain don’t make you a big man,” coos Allen, as if she’s telling Dizzee off for his exhibitionist ways earlier in the LP.

Dizzee Rascal’s position at the peak of the UK hip-hop scene – grime, whatever – is undeniably rock solid, but it’s a position attained entirely through the skills exhibited on his previous two LPs. Maths & English is a fractured affair, uncertain of its own voice and, therefore, lacking in cohesion and any ebb and flow. It’s as if it was made exclusively for the download market – there’s a top-quality EP of party-starting dancefloor _bangers amongst the tracks here, but it is surrounded by a slew of fists-clenched fiery tirades, swarming like locusts, ready to strip it of its charm. Some tracks are simply too much.

Our advice, then: pick and choose via online outlets to get the best out of this album, as in this instance Dizzee’s mathematical skills have failed to calculate a formula for another must-buy release. Still, he earns a little respect for laying out his workings so neatly.