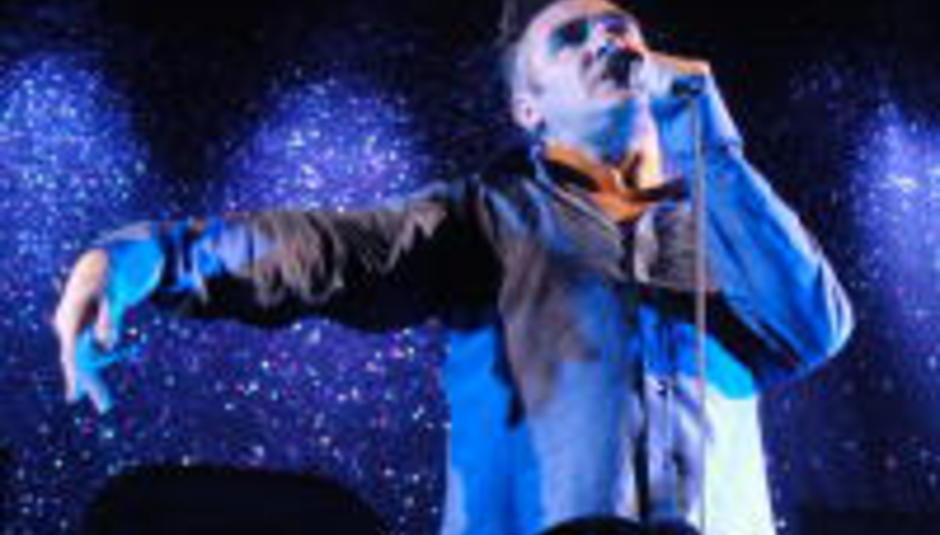 by Andrew Future June 12th, 2004
Morrissey celebrated a blistering start to Meltdown by slamming former label EMI. Despite The Libertines' cancellation due to Pete Doherty's drug problems, the night was full of shirt flying action and some old Smiths favourites too.

Mozza told the packed out audience: "EMI have just released two DVDs of truly atrocious quality. I beg you, don't buy them."

The stage was backed by huge, Elvis-style lettering spelling out Morrissey's name. For exclusive photos from this event, click here.

The two new releases, Hulmerist and Malady Lingers On, come off the back of the huge commercial success of Morrissey's comeback album for Sanctuary Records, You Are The Quarry, which charted at number two.

Showing off his tanned and toned body, he changed his shirt several times, twice throwing it into the crowd. "I had to take the wet shirt off, or I'd end up with a shocking cold," he joked.

Before ending with an encore of 'There Is A Light That Never Goes Out' he thanked the crowd for buying his new album and quipped: "If there's anyone with the surname Keane, they better leave the building now."

The former Smiths star is curating the annual event, held at the Royal Festival Hall on London's South Bank. He plays two more shows on 25 and 26 June before playing at Glastonbury, Move and the Reading and Leeds weekend.

Morrissey's new single 'First Of The Gang To Die' is released on 12 July.