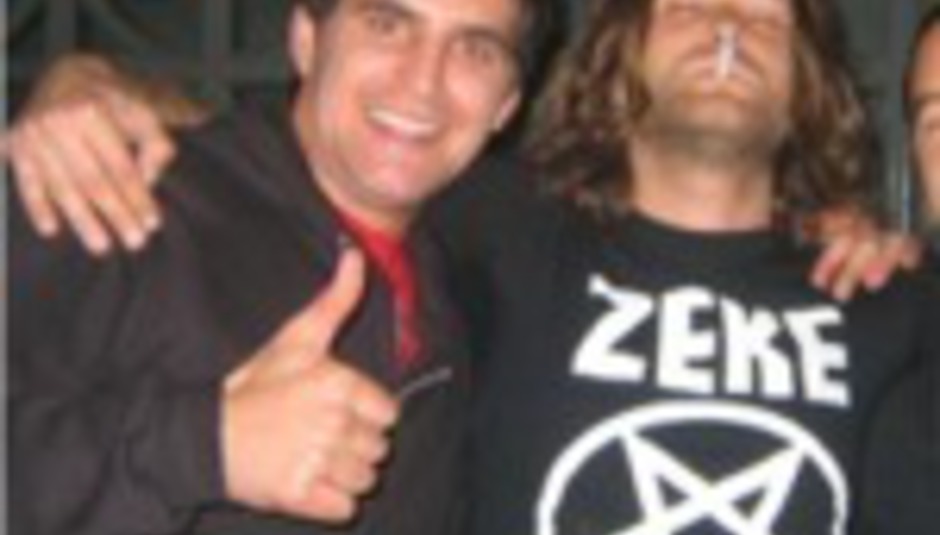 (Winnebago) Deal me a new hand

Those mighty rockers, Winnebago Deal, are set to motor across the world during 2006 (starting in London, of course) in support of a brand, spanking new album. They've got bags of songs ready and it's gonna be facking great. Trust.

The angry Oxfordshire duo are heading over to Seattle next week to record their as yet untitled third album with legendary producer Jack Endino. He also produced their last album, Dead Gone - a celebration of all things that are great. Mainly whiskey and fighting! WOOOOOOOO! Warrior frontman and lone guitarist, Ben Perrier (pictured, right, with message board goon, Mark Ralph) has this to say about the forthcoming album:

"The record will be, by Winnebago Deal standards, a concept. 14 songs that tell 14 different stories of insanity, paranoia, life and death; some true, others not... the lines will be blurred... Based on what has been seen and what was thought to have been seen over the duration of a year, it is the life of the mind! You can't fuck with it! We should sell the screen rights to Warner Brothers and they can make a film. We're definitely hitting some of our heaviest notes here and some of our most melodic, so it should be our most varied and fucked up record yet. Once again Jack Endino will be at the helm so we're in safe hands... expect high energy."

With their full-out, balls-to-the-floor hard rock, The Deal are approximately 5 million times more 'grunge' than any of those horrible nu-poseurs such as Creed, Nickelback or whoever else. Jack Endino also produced Nirvana's finest album, Bleach, as well as stonkers by Tad and Soundgarden. Winnebago Deal will be in good company when the album drops out of Fierce Panda's coffers this summer. Watch out for a full UK tour around the time of the album release.

Before that, however, they'll be playing Club Fandango @ Water Rats on Wednesday 19th April. Expect high energy. And exploding ear drums. And probably Ralphcore who is pictured just above with the other Ben (Thomas, Winnebago Deal drummer) and some other dude, and then Nick Oliveri (Josh Homme's former best friend, etc.) as well.

Click here to go to the Water Rats gig. Then add yourself. Then buy a ticket. Then rock the fack out.