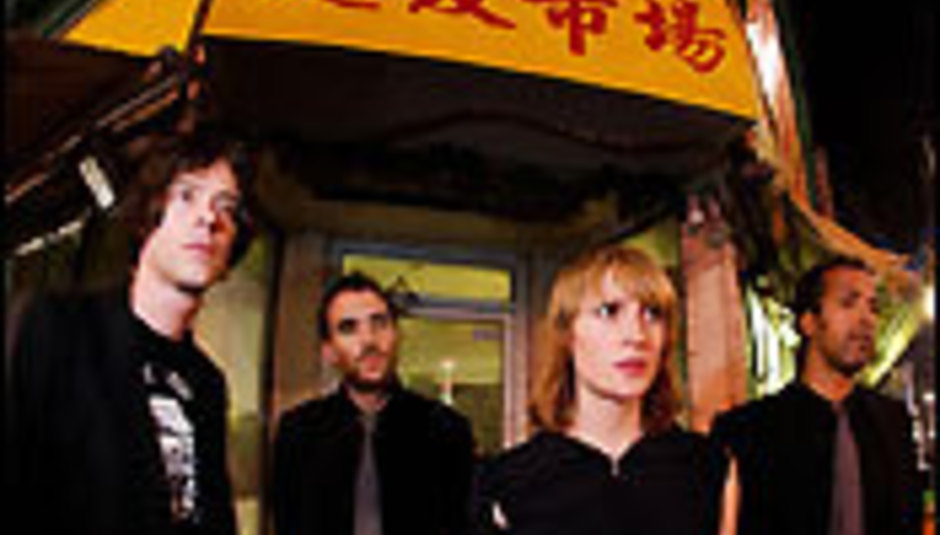 The more attentive of you will have spotted a mention on our Podcast a few weeks back that we've signed a new act to the Drowned in Sound Recordings label stable of Martha Wainwright, Jeniferever, Redjetson and thisgirl. Yes, it is true, we've signed Metric.

Some of you will already know who they are and have probably bought the record on import and have an iPod full of bootlegs. For those of you who don't know, they're one of the most exciting bands in the world today. Kicking off 2006 supporting The Rolling Stones at Madison Square Garden (as Mick's personal choice, no less.). They're a Canadian four-piece, fronted by indie-pin-up, socio-poet, Emily Haines. Many of you will have heard Emily's voice on albums by Broken Social Scene and Stars. Metric are an altogether different beast, lurching more towards the dancefloor than the 'pit but with moments staring at swirling stars. Or something.

The first single will be part of our (to be unveiled) Digital Singles Club, entitled 'Poster of a Girl' - the video for which you can catch over on their website at ilovemetric.com. The album 'Live It Out' will be released in June.

The exciting news for Brits is that they're finally coming back to the UK, following last year's dates with Canadian label mates DFA1979. They play a Drowned in Sound & Great Escape: Barfly Tour which has gone onsale today.

Support on all dates is Komakino (who're on tour with Bloc Party next week myspace.com/kkkinoxxx).Get Tickets Here

The Brighton show is part of the Great Escape music festival which is to be fully announced in coming weeks. There will be a DiS stage at the event and everything. More details at www.escapegreat.com

You can also catch them at Coachella and on tour in the USA now. Album release news and more to follow...

DiScuss: How would you describe Metric? Seen them live before? Tell us some geeky factoids...