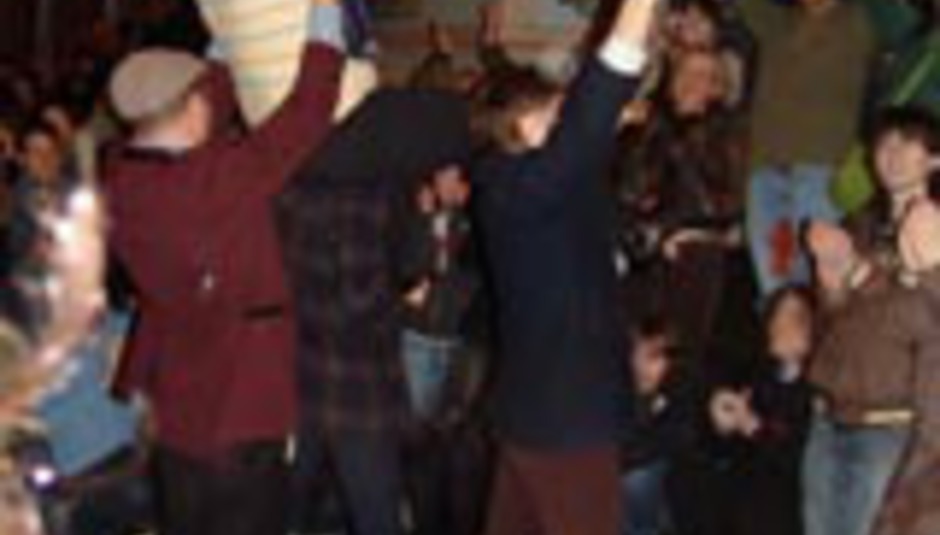 EXCLUSIVE: No show for OK Go in Glasgow

OK Go were forced out on to the streets last night in Glasgow due to a power cut at King Tut's Wah Wah Hut, where they were scheduled to play. Power was lost in a small section of St Vincent Street at around 8pm and electricians were not able to resolve the problem in time for the gig to go ahead. Staff herded out the fans that filled the downstairs bar on to the street at around 9pm and instructed them if anyone stepped on the road, the band would stop playing immediately. Three quarters of the band, Damian Kulash, Andy Ross and Tim Norwind, were perched on the doorstep of King Tut's next door neighbours with a small array of instruments, and proceeded to play a short set consisting of tracks from their forthcoming album, 'Oh No'. After performing 'Invincible', 'Oh Lately It's So Quiet' and 'Do What You Want', OK Go asked everyone to clear a space on the pavement so they could perform their trademark dance routine. By this point, a police car had arrived, and the band were informed that they weren't allowed to play any music. Kulash urged fans to sing what they knew of forthcoming single, 'A Million Ways', and the four-piece performed the full routine.

King Tut's announced that it would not be reopening, and asked everyone to make their way home shortly before 10pm.