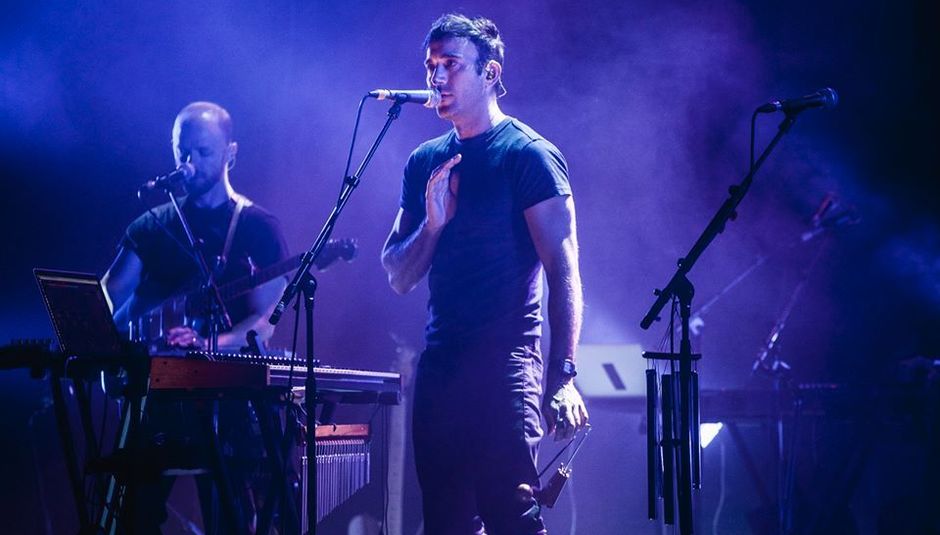 The Auditori Fòrum is a grand, cavernous venue on the outskirts of Barcelona that looms over its surroundings, an outsized triangular monolith laid on its side. Just over four years ago it played host to Sufjan Stevens’ live show for The Age of Adz during 2011’s edition of Primavera Sound. That concert ended in jubilance: a glorious ‘Chicago’, massive multicoloured balloons and a jumping, dancing, roaring audience. Tonight closes with ‘Chicago’, too, but in simple, acoustic form: spectacle making way for intimacy; volume - though things do get unexpectedly loud in the main set - for introspection.

There’s a moment, early on in the evening, when Stevens forgets the words to ‘Should Have Known Better’. Cue a sidelong glance at his bandmates, worry written on his brow. Then he’s back with it, and the song’s gorgeous back end blossoms into something very different from its on-record counterpart, Stevens swapping guitar for vibraslap as his players chime in alongside him. The band had emerged minutes earlier and, bathed in soft red light, offered up a sonorous, lovely ‘Redford’ before getting straight into the business of airing Carrie & Lowell in full (albeit out of order), starting with its opening song. ‘Death with Dignity’ is slightly strained, though, and Stevens’ voice quavers as he struggles to stay in tune. A palpable sense of unease carries over into ‘Should Have Known Better’, and doesn’t wear off for a while.

Given the nature and content of Carrie & Lowell, an album as devastatingly, achingly poignant as they come, this shouldn’t be a surprise. Between songs Stevens massages his temple, catches a ragged breath here and there, looks at the floor. Dressed entirely in black, he doesn’t say a word, and his focus is inward, intense. Upon seeing the record performed live it becomes apparent just how blunt - how naked and fearless - a catharsis it really is, and lines that resonate on record hit with untold weight when they’re being delivered by their author just a few feet away. In conversation with Dave Eggers earlier this year, Stevens spoke of how much he was looking forward to bringing these songs on the road, how the act and discipline of performance might offer him some respite from their subject matter. It’s hard not to shake the feeling that he was a little optimistic on that front, something he all but confirms later in the evening.

He is joined by five other players, and while he remains a fascinating focal point, they all do an incredible job of bringing such an instrumentally sparse work to life. Some songs from the album remain so - ‘No Shade in the Shadow of the Cross’ is every bit as stark as its recorded counterpart - but most are boldly reimagined, set against a backdrop of glowing geometric shapes, Stevens’ home videos and landscapes both developed and unspoilt. ‘John My Beloved’ becomes a sad, soaring rock song; ‘The Only Thing’ is lit up by chimes and spectral lead guitar; and ‘Fourth of July’ is sped up, its repeated deathbed refrain “We’re all gonna die” blistering, elemental, genuinely gut-wrenching.

‘The Owl and the Tanager’ receives an airing later on, its wordless, falsetto melodies all the more affecting in concert, while ‘Vesuvius’, after the intermittent volume of the preceding, is both fantastic and surprisingly of a piece with the rest of the evening. The set ends, though, like Carrie & Lowell, with ‘My Blue Bucket of Gold’, except here the two minutes of chilly, ambient swell it fades out on are extended to something like fifteen. Dual sapphire mirrorballs project shards of light throughout the auditorium as the band slowly and reverentially sculpt a wall of noise; it culminates in a sound not unlike a helicopter taking off, then it stops, abruptly, and the audience rise to their feet.

When Stevens emerges a few minutes later, he’s wearing a blue and pink flowery shirt over his black tee and has a yellow baseball cap perched atop his head. There’s a moment when he flubs the first verse to ‘Concerning the UFO Sighting Near Highland, Illinois’; another when he clonks the machine head of his guitar into his mic stand during ‘To Be Alone with You’. But there are no anxious glances at his bandmates. Instead he grins, goofily, and the audience laugh along with him. The cloud of tension hanging over the set evaporates, and Stevens addresses his public for the first time all night to whoops, hollers and pledges of love.

“It’s a real emotional trial, to play and share these songs,” he says, offering heartfelt thanks to all in attendance; “but I think it’s important to carry each other’s weight.” Before the closing, acoustic ‘Chicago’, the band run through quietly immaculate renditions of ‘John Wayne Gacy, Jr.’ and ‘Casimir Pulaski Day’. As they bow, later, to another standing ovation, the applause rings out for minutes on end. A young woman dashes onstage and presents Stevens with a gift bag before the security can spot her. A sense of how much these songs mean to people, the solace and peace they provide, is palpable. As brilliant as the show has been, it is this sense, and this moment - as Stevens smiles and dithers and clearly feels like he can’t take his leave, not when further gratitude is owed, beatific and visibly overwhelmed - that elevate it to something truly special.