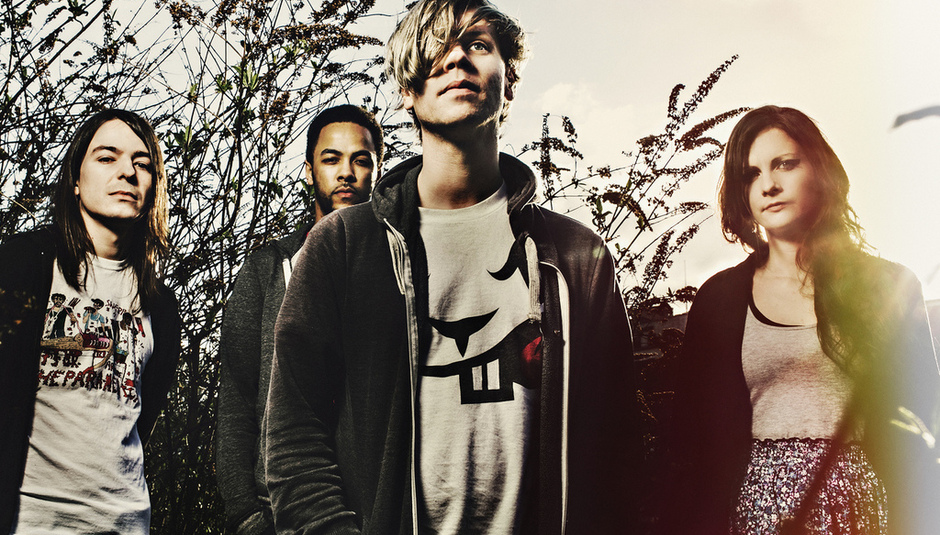 MAP (the Music Alliance Pact) is a free compilation of tracks by acts from around the globe, chosen by local bloggers. Each month DiS picks an act from England, and this month we've gone for returning favourites....

ENGLAND: Drowned In Sound Johnny Foreigner - Le Sigh Johnny Foreigner (or JoFo as they're more affectionately known) make the kind of yelping indie-pop that's as brash as it is infectious. On the surface their fast-paced skittering squall has so much joy, but beneath the ornate bush of guitars and rimshots there's always this hint of frustration with the world, with romance or in Le Sigh's case, they can be found wrestling with both: debunking the myth of late-night love in the clubs and kebab shops of Solihull (or any other small town).

Click the play button icon to listen to individual songs, right-click on the song title to download an mp3, or grab a zip file of the full 26-track compilation through Ge.tt here.

ARGENTINA: Zonaindie Jimena Lopez Chaplin - Hombre Estrella Jimena Lopez Chaplin is one of the finest emerging voices from the local scene in Buenos Aires. She has been a part of different musical projects, including the Varias Artistas collective formed by Lucas Marti. However, in order to fully appreciate her songwriting and musical talents, you should listen to her two solo albums, Ojos De Plástico (2009) and El Espíritu De La Golosina (2013). Hombre Estrella is a magnificent rendition of David Bowie's Starman, with Spanish lyrics and arrangements by Jimena.

AUSTRALIA: Who The Bloody Hell Are They? Promise Land - Recall Promise Land is the new project of visual artist Johann Rashid (also a member of Melbourne post-punks Eastlink) and producer Paul Harmon. Their first single Recall has just been released on Hole In The Sky, the imprint run by Modular band Canyons. The track aims to inject a bit of the occult into contemporary urban life, with deep noir production from Harmon featuring eerie vocal samples and an agitated no-wave tick. Meanwhile, Rashid delivers a slick, strained flow that's almost closer to chanting than song.

CANADA: Quick Before It Melts Look Vibrant - Sweater In The Lake The battlefield is set: an infantry of soldiers carrying swords made of static, a volley of cotton candy-covered cannonballs and the melodic noise of instruments imploding. This is the sound of Montreal's Look Vibrant in their element. Surrender now and face aural annihilation.

CHILE: Super 45 Jumper Joy - Calma Que No Jumper Joy is the moniker for musician and composer Diego Palma who, since 2013 and after being a member of El Último Dinosaurio, decided to go solo on this playful power-pop project, splattered with references to psychedelia and shoegaze. Calma Que No is taken from his second EP released in January.

CUBA: suenacubano.com X Alfonso - Reverse If we want to make room for protest and reflective songs at the expense of the banal and meaningless then we need more like this one. The track Reverse also gives its name to an album which X Alfonso released in 2011 as "antibiotic art". The song deals with social issues, while its rock style, with shades of Cuban tones, injects excitement and motivates us to listen carefully. The Reverse album was spawned from the Cuban Art Factory, a cultural project which opened a new institution in Havana this month.

DENMARK: All Scandinavian Negash Ali - What You Got He's been a force on the Danish hip hop scene since he was 16 and with three albums under his belt at the age of 23, Negash Ali releases what he describes as his best work yet with the African Dream EP on February 17. Here's the awesome What You Got as a MAP exclusive free download (with video to match) and also check out the video for new single Fire In The Sky.

DOMINICAN REPUBLIC: La Casetera Tornadu - Soft Battery Imagine a video game from the very first Nintendo console where the main goal is to attend post-punk concerts. As odd as it sounds, that's what Tornadu's music reminds us of. Strangely futuristic yet so rooted in that analog 8-bit sound that filled our childhood with so many fun and thrilling moments, producer Gennaro De Santis opens the portal into his musical world with Soft Battery, taken from his debut Diodes EP. Tornadu plans to make a full-length album in the near future, but for now you can get the rest of his songs and some remarkable remixes on Beatport and iTunes.

ECUADOR: Plan Arteria Mariela Condo - Flor De Quebrada Mariela Condo is one of the most stunning, deep and authentic voices of Ecuador. She represents a new face of contemporary Andean music. Her second album Vengo A Ver also shows Mariela has everything it takes to become one of the new icons of world music.

ENGLAND: Drowned In Sound Johnny Foreigner - Le Sigh Johnny Foreigner (or JoFo as they're more affectionately known) make the kind of yelping indie-pop that's as brash as it infectious. On the surface their fast-paced skittering squall has so much joy, but beneath the ornate bush of guitars and rimshots there's always this hint of frustration with the world, with romance or in Le Sigh's case, they can be found wrestling with both: debunking the myth of late-night love in the clubs and kebab shops of Solihull (or any other small town).

GREECE: Mouxlaloulouda Ruined Families - Only Need Is Real Ruined Families' album Blank Language radiates a desperate, ramshackle charm that runs counter to the ferocity and frigid gloom of the music. Their blistering, rowdy post-hardcore and punk has a powerful, raw intensity; there are sharply dissonant, throat-wrenching and angular groans, stutters and roars; the thundering drums and braying guitars pummel relentlessly over the breathless hurtle of nine exhilarating songs. Listen to the explosive, emotionally overwhelming Only Need Is Real and watch the brilliant video for Pedestal with compiled footage from their recent European tour.

INDIA: NH7 Gumbal - Albatross Arjun Iyer and Satish Sridhar make up Gumbal, a brand new electro-pop project based in Mumbai. Their first public offering is A For, an EP spawned from a couple of days of songwriting and recording, all of it constructed in the key of A. Iyer and Sridhar's influences from their previous melodic alt-rock project Eatshootleave have definitely crept into Gumbal, giving it plenty of catchy melodies, quietly confident vocals and an urgency that's much welcome in this style of music. Fans of A Perfect Circle, Puscifer, Incubus and Radiohead will like this. Albatross is our much-fought-over pick off A For, though the EP is quite the trip when listened to from start to finish.

INDONESIA: Deathrockstar Danilla - Buaian Danilla is a young woman who sings about attraction in the style of 1950s Indonesian romanticism. You won't be able to resist the swing of her graceful alto vocals. Her debut album Telisik is available to purchase via iTunes.

ITALY: Polaroid Sin/Cos - Away Lush electro-pop with a soul, and a lot of autotune and harmonizer too. This is the sound of a young man struggling with his feelings. Darkness and light fight each other, and in the middle stands the voice of Maolo Torreggiani (My Awesome Mixtape/Quakers And Mormons), the main instrument in the first Sin/Cos album Parallelograms.

JAPAN: Make Believe Melodies Hideo Nakasako - Groove Me Despite the title, Groove Me is not totally devoted to the dancefloor. Osaka beatmaker Hideo Nakasako definitely adds in plenty of feet-moving elements, it just takes a little bit to really kick in. The first minute of this washes over the listener, leaning towards being contemplative. Then the drums zip in and it goes off in a new direction, further pushed onward by sliced-up yelps.

MALTA: Stagedive Malta Skimmed - Isobel Skimmed bring together an affinity for producing brooding, intense tracks infused with 60s pop sensibilities to create what are essentially pop songs with a deeper, darker and more intimate element. Isobel is one of the more haunting tracks on their 2013 debut album Summer Lovers.

MEXICO: Red Bull Panamérika Los Blenders - Surf De Amor The band's Facebook profile announces: "The Blenders stole your dad's hairdo, your mom's panties and your sister's heart." Surf De Amor is a great surf/lo-fi song adorned with 70s aesthetic, which inevitably suggests long cars, large tufts and many fans surrounding this band from Mexico City. Its video will give you a bigger picture.

PERU: SoTB Los Mostos Verdes - Calima The music of Los Mostos Verdes is predominantly reggae mixed with rhythms such as dub, funk and rock to achieve a more universal sound. In 2013 they released their first album with 10 innovative tracks that convey positivism and happiness. Calima is its first single.

PORTUGAL: Posso Ouvir Um Disco? Thomas Anahory - Hey Hey Thomas Anahory is a true beach boy. When he is not writing and playing his songs, he spends his days on the coast bodyboarding. Thomas says he is inspired mostly by American rock classics such as Bob Dylan, The Doors and Bruce Springsteen, but his music is also reminiscent of 80s bands The Long Ryders, Miracle Legion and The Alarm. Hey Hey is taken from his newest album Thank Your Lucky Stars.

PUERTO RICO: Puerto Rico Indie Juventud Crasa - Despúes Del Tiroteo Puerto Rico's decade-plus punk veterans Juventud Crasa are one of the island's most beloved bands. Their "California via Spain" style has resulted in a polished yet abrasive sound that is instantly recognizable and catchy as hell. The band recently released a split 7" EP with local up-and-comers Tus Idolos, which opens with the explosive track Despues Del Tiroteo.

ROMANIA: Babylon Noise Violent Monkey - Funk Strikes Back Violent Monkey are a band from Bucharest who are influenced by funk and Motown, as well as electronic music.

SCOTLAND: The Pop Cop The Second Hand Marching Band - This Is The Story For an exuberant folk-pop collective whose membership has been as high as 23, each with an assortment of extravagant instruments in tow, one of the most remarkable things about The Second Hand Marching Band is the fearlessness they show in confining a song to a single vocal and acoustic guitar if that's what they think works best. In 2010, they gathered some homespun EPs and rarities into a charming release titled Compendium. Since then they've been recording in ad hoc spaces to weave their debut album proper, A Hurricane, A Thunderstorm. Out on March 2, it's a triumph of diversity, veering from bellowing, unpretentious pop to sparse, poignant laments.

SOUTH KOREA: Korean Indie Big Phony - Bedford Stop Singer-songwriter Big Phony released his first album in 2005 and has since put out several more, most recently the twin offerings of acoustic album Bobby and the more electronic pop-oriented Long Live The Lie earlier this month. The sweet and addictive Bedford Stop appears on both, but this is the comforting, home-recorded version that opens Bobby. Big Phony is headed for SXSW next month.

SPAIN: Musikorner Being Berber - Anthem Being Berber describe their music as a "pile of re-used beat up cassettes for road trips". The grandiloquence of M83 is easily noticeable as their main influence. Not afraid of delivering a song that's easy to sing along to, what we have is a real Anthem.

UNITED STATES: We Listen For You Tender Mercy - In Us Louisville's Mark Kramer (aka Tender Mercy) crafts softly dramatic experimental folk ballads that analyze the hypnotic ability of sound. This type of music is challenging, even in its simplicity, so give it a few spins, let go and sink in.