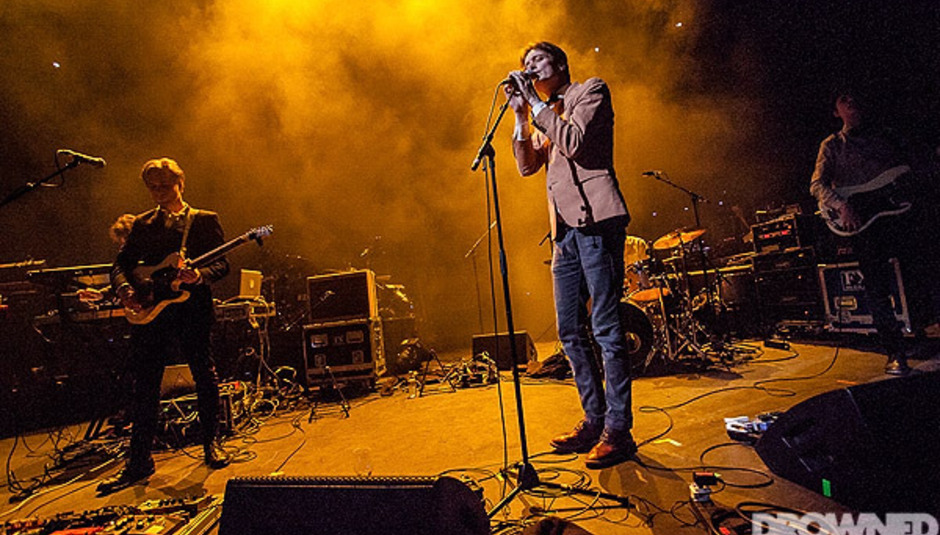 Those glorious Danes Efterklang are about to embark on their final tour of 2012's fantastic Piramida album (UK Dates below and more are here).

Efterklang have a very special place in DiS' heart, and if you've garnered anything about the band you'll know they don't do things by halves: from collecting samples from remote corners of the world to making a documentary The Ghost of Piramida about the process, which was recently made available digitally... and now they have not one, but two new videos.

To further underscore how much time, care and attention, not just for their music, but for their fans they dedicate to what they do, Rasmus from Efterklang has written us this lovely introduction to their videos (lesser bands struggle to send us a one sentence intro to their new video).

Over to you Rasmus...

"One of my favourite Efterklang videos of all time is the one for 'Illuminant' by Tobias Stretch.

Tobias wrote to us just when we were about to release our second album Parades (2007) and asked if he could make a video for us. We were fascinated by his previous work so we let him listen to all the songs on the album and told him that he could choose whichever one he liked. We had no budget for the video, so we felt that was a nice gesture. He came back and asked if he could do a video for 'Illuminant'. We were a bit surprised by his choice. The song is the most abstract and non-commercial on the album and back then we were still stuck with the thought that you made videos for the singles. Time passed; we released the album and we lost contact with Tobias Stretch and thought he would never finish the video. Then, out of the blue, six months later he sends us a finished video. We were mind-blown; it was an incredible video. To me the song and video are one united thing now; when I listen to the song I see the video in my mind.

So why am I talking so much about this video from 2008 when I'm supposed to introduce two new videos for the songs 'Black Summer' (by Everything All at Once, Kevan Funk and Benjamin Loeb) and 'Between The Walls' (by Sebastian Birk) from our latest album Piramida?

The reason is that the videos are closely connected to the 'Illuminant' story. Tobias Stretch taught us several things. The most important thing was to have the courage to put trust in total strangers if we like their energy and art. Another thing he taught us was that a good video can enhance the listening experience of a song and that it can help shine a spotlight on some of the more overlooked tracks on an album.

All this is in play with the two new videos we are presenting today.

We did provide the directors with a budget this time, but they came back with something that made our financial contributions look rather silly.. I'm left in awe when I think of all the love and work they have put into these videos and when I think of the many favours these guys have pulled to create their videos.

I don't want to elaborate too much on the two new videos (seems like I got sidetracked from the beginning!) I just want you to watch them. I like both of them a lot! 'Between the Walls' for the acting, the emotions, the sense of the story you feel but don't really understand; 'Black Summer' for the amazing cinematography and for the genius idea of casting the videos with dogs."

This video for 'Between the Walls' was directed by Sebastian Birk. It takes place in Copenhagen and the two actors are Sara Hjort and Peter Hald. There's a full list of credits over on YouTube.

The video for Efterklang's Black Summer was made and produced by Everything All at Once (Kevan Funk and Benjamin Loeb).

A note from Kevan Funk and Benjamin Loeb, the makers of the video:

The conceptual basis for the Black Summer video was anchored around a desire to explore issues of incarceration and our perception of criminals. The interest was not to focus on violent criminals, it was instead to focus on individuals who end up in the penal system as a result of systemic issues around poverty, abuse and neglect. The displaced, and ultimately doomed, animals that carry the story are used to illustrate a particular commentary, one that, ironically, attempts to humanize this maligned population.

The Ghost Of Piramida, a film documentary by Andreas Koefoed and featuring Efterklang, is out now. To download head to https://vimeo.com/ondemand/piramida/67204269