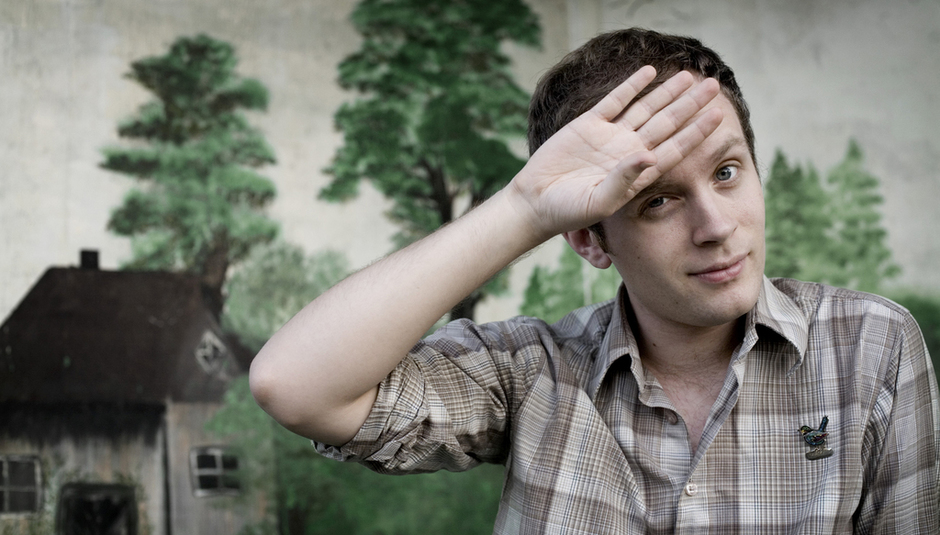 Bloody hell! A new song by Jens Lekman! What pleasure! The Australia-based Swedish indie-pop singer of much popularity last released a record what seems like a million years ago. Actually it was just three, but in such time he's contracted swine flu, moved abroad and also written and now released this song, called 'The End Of The World Is Bigger Than Love'. And it is.

The note on the website also says that Jens is back in the studio working on his new album, which is good news. But you'd expect that given that a new song has appeared, no? He also tells us the story of the song and behind it. It's quite long but I'm going to paste it anyway. You need to know these things.

“It was the day before the american election 2008 and I was filled with a hopelessness that only a McCain supporter could have shared with me at the time. I was in Washington DC to perform for swedish TV, sitting in the couch with a profesional smile on my face, joking with the hosts and discussing the lobster with the TV chef. I saw the clips online sometime ago, it’s amazing what an actor I can be if I really make an effort.

I lived in America back then, up in New York. At the time I felt like everything I touched was turning to shit and I had decided to put everything on one card. Subconsciously I knew I needed to hit the bottom so I could work my way up again. I needed confirmation, I needed someone to tell me it wasn’t going to work out, not this way. Yes, there was a girl involved in this. I was very much in love with her.

Some things you just go through. You don’t write about it, you don’t turn it into art because it can’t be turned into art. I didn’t write any songs that year because you can’t pour manure into an espresso machine and expect a cappucino to come out. When they announced the results and the streets filled up with people celebrating I felt happy to be part of something bigger than myself. It was a feeling that lasted me until the very last days of December 2008 when I finally sat down in my old teenage room at my parents house and I wrote this song. Then the year ended.

It’s a song of hope. When love turns it’s back on you it’s nice to know there’s a world out there that doesn’t give a shit about your problems. That forces you to keep your head held high and move on. A world that is fragile and beautiful. Maybe it can sound cold to some of you, but let me make it clear that I believe in love, I just get so wrapped up in it sometimes that I need to put it into proportion. It’s something you have to do a lot when you’re Jens Lekman.”

There. Mr Lekman plays Manchester's Deaf Institute on August 2 and follows it with a show in London, at the Union Chapel the following day. Go and see him.