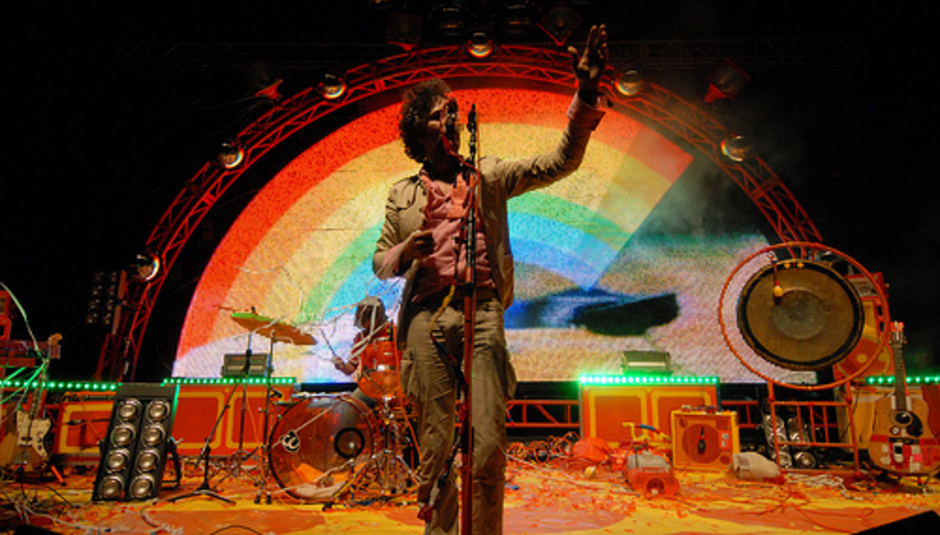 Oklahoma's finest export this side of a musical, The Flaming Lips, will release an interpretation of the seminal Pink Floyd album Dark Side Of The Moon, reports the LA Times. Yes. It will be amazing. Possibly.

Rumoured to be appearing on the album are such luminaries as Henry Rollins (wow, two Henry Rollins-related news stories in a day?!) and Peaches. The news was delivered by Lips frontman Wayne Coyne, during a pre-show Question and Answer Session ahead of their recent gig in Hollywood.

The Lips' version of Dark Side Of The Moon will be a collaboration between the band, Stardeath and White Dwarfs, who have Wayne's nephew Dennis Coyne as a member. Anyone wishing that the album gets a full nice spangly set of cover art will most likely be disappointed - a spokesman for the band said the record will be released only on iTunes, at least initially.

Said Coyne at the show:

“I think our audience would forgive us for going out in the further regions of whatever we could think of, but I don’t think we’d be worthy of being forgiven if we didn’t do that. They’re giving us the freedom, the encouragement, the money and the time to say, ‘Go somewhere where no other band could go, and come back and tell us what it was like.’”

Of course, it's not the first time that this particular record has been covered or interpreted. Reggae cover merchants Easy All Stars released a dub version of the album, cleverly calling it Dub Side Of The Poon Moon. Listen to that on Spotify here.

Coyne also said that, although their latest LP Embryonic was the last in their current contract with Warners, they plan to release more with the label.