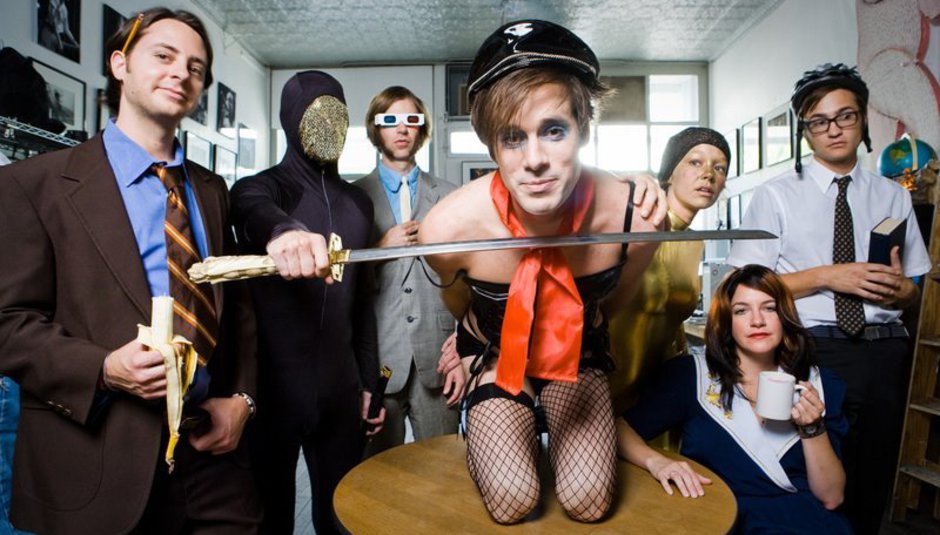 Ahead of next week's Shepherd's Bush Empire show and performances at Latitude and Oxygen, of Montreal linchpin Kevin Barnes talks about the festival experience, and why you should always take, along with your handwash and sunscreen, a mask. And, keep reading to win tickets to the Shepherd's Bush gig...

John Brainlove: So Glastonbury happened a few weeks ago here... have you ever been?

Kevin Barnes: Glastonbury, no actually, is that a really big one? We've never really played any of the really huge festivals, I mean, In the US we have, but I imagine they're all pretty much the same, a tonne of people. I think they're all quite alike, get a bunch of people together in tents and the first day is usually pretty exciting, the second day is slightly less exciting, and then they third day you're destroyed. I think it's a fun extreme experience for people to have that I'd definitely recommend though. If people love music and don't mind the other crap it's a fun thing to do...

JB: Did you go to festivals when you were younger? Do you have a favourite, as a punter or as an artist?

KB: I went to Lolapalooza when I was younger when it was a touring festival. I never actually spent the night when I wasn't involved in the music. My favourite so far is probably Coachella but that's mainly because of the kind of the treatment they give the artists. You know, a lot of times the artists aren't given any special treatment, they herd all the artists together in one little place with some cheap beer and a portacabin. And you're thrown onstage and dragged offstage. But Coachella had really nice trailers and all the bands got to hang out together in this cool little space, and you got to meet people and really connect with everybody. So from the artist perspective that one's great because you get to meet all these people you really like and respect.

JB: What items would you take with you to get through the festival experience?

KB: Well the thought of germs doesn't agree with me, so some hand sanitizer... festivals aren't that sanitary and people could get sick really easily... I definitely would bring that... some sun cream. And maybe like a funky hat or a mask, like a weird mask. Masks are great cause you get some anonymity and you cabin wander through the crowd without people really knowing who you are, and become like this super hero or something. You can go and freak people out and have fun being a weirdo. The last festival I was at everyone was dressed up, it was like mardi gras, I went as Teen Wolf and there was all kinds of crazy stuff going on. It should be like that. Other worldy event that's not like day-to-day life, not the mundane life you have 99% of the time. It's a chance to really do some crazy stuff and freak out for like a weekend. It's very healthy.

To win a pair of tickets to the Shepherd's Bush Empire show on July 14th, comment below with the answer to the following question:

'Stillness Is The Move'