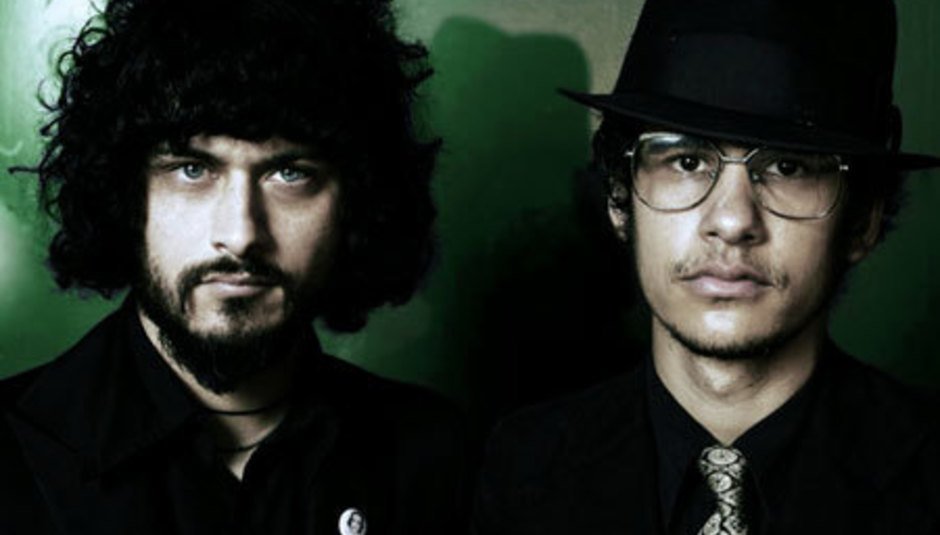 Your June instalment of the seemingly now monthly Video Drowned-Up brings you all sorts of wonderful artistic pieces. If these are the ones that made it in, think about the vids that didn't!*

It's been a big month for online videos, though mainly of the documentation of violence in Iran rather than y'know, the sort of pretty musical videos which we'd normally run in this column. So sadly no scenes from Tehran for you.

This month we've done our absolute best in making the videos as BIG as possible. We hope you appreciate this effort, it's certainly been a slog.

Our favourite from this lot? Sneaking ahead at the moment are Simian Mobile Disco, even though it looks like it should be an advert for Panasonic TVs or something.

*N.B - The ones that didn't make it in were just 35 variations on Keyboard Cat Playing People Off, the best being the Walker Texas Ranger vs. Chuck Norris vs. Haley Joel Osment one.

The Mars Volta - 'Since We've Been Wrong'

This is the bit where The Mars Volta walk dangerously into ballad territory, yet pull it off. It really is a wonder how Cedric gets those headphones on. Astonishing scenes.

The Mars Volta - "Since We've Been Wrong" fr. Octahedron

Natasha Khan has really got that whole Kate Bush thing going on recently, no? Just like a heck of a lot of music now has that "ooooh '80s sounds. RETRO!" thing going on, too. That said, this performance would be aided by the introduction of masks and veils.

Er, so...cool video if slightly reminiscent of those Persil or Ariel or whatever ads from way back when. Lenor? Bounce? More than can be said for the song which is that little bit sickening. Acid-reflux inducing perhaps. No tears, mind.

See life through the eyes of Lily Allen. Or a Lily Allen fantasy dreamland, to be more correct. The lyrics slip into the more vitriolic yet the music never strays from cheery in a very 'Lily' way. Basically Ms Allen's hand turns into some kind of weird photoshopping tool in real life, leaving her to reek havoc on the world.

One of Speech's more dark moments on Speech Therapy and, as you can see from the title, this one features Micachu, though fleetingly. All she seems to do is mumble atop some crispy beats.

Probably wishing to be lumped in with The Boy Least Likely To, it's perhaps a bit much. to take. Unexpected break down at 2:08 improves things vastly. Nevertheless, it looks like they've employed a proper artist, like, for this video. Beats watching guys with guitars hands down.

This was rather designed to be watched in HD. I mean, obviously...but it's full of primary colours, dripping silver paint and a Mamma Cass playing card. Are they taking a pop at all those who own a library of "indie collectibles"? If they are, it's a bit of a shit attempt at it...

These video-cum-cinema-montage-musical type videos are reminiscent of that Aqua song from Sliding Doors with accompanying video. Dreadful stuff. The God Help The Girl video is six times better than 'Turn Back Time'. Why six? Because that's the amount of milliseconds that any sane mane or woman can endure those fucking horrific key changes.