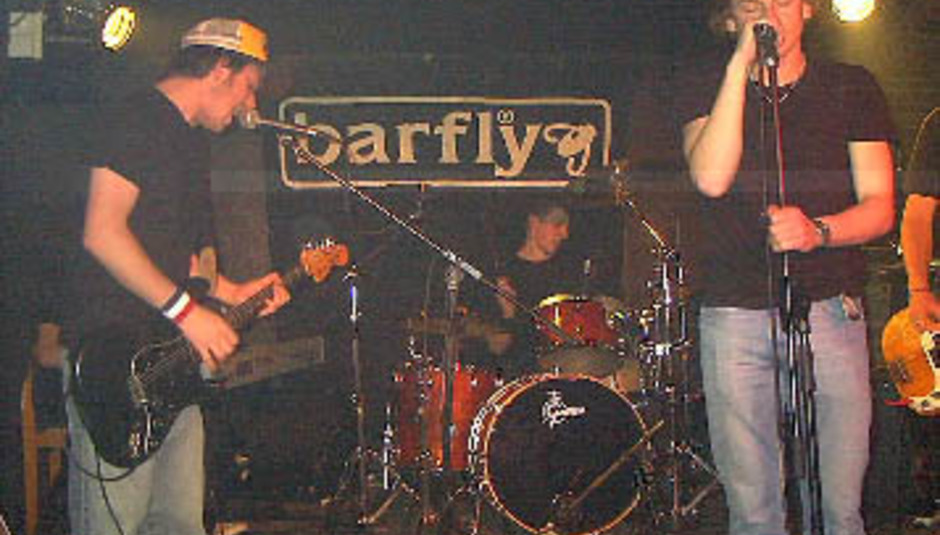 James Chant, writer, vocalist, guitarist and all round ass-kick merchant with Small Victories, is running 'round Cardiff. As we prepare to meet, he and his band are on the verge of a UK jaunt to promote the October 6th release of 'Holding On Hopefully,' their debut album. (STOP PRESS: Scratch that date. Try 10th November instead.)

Still in possession of a nine 'til five, he's been having a mental week of it cramming pre-tour interviews into most lunch hours and evenings and as he rushes in, I signal him over from the corner of the bar where he joins me, looking rather puffed.

After various line-ups and the jettisoning of their former manifestation Tommy And The Chauffeur, the album has taken a complete age to put in an appearance. It's got to have been one of the longest pregnancies ever. A swig of water and Chant is ready for action.

"Yeah, it's been about eight years since it started taking shape in thought but in recording and rehearsing, it's probably been about three or four."

'Holding On Hopefully,' is a varied collection of wistfully intense songs that can be fragile, raucous or both at the same time, built upon intelligent lyrics of a sometimes highly unusual nature. What's the oldest song you have on there?

"Could be the title track or maybe 'Thawed,' but then there are another three that were demoed together back in February 2001."

Now you're finally ready to bombard the unsuspecting public, which bands that are around now do you think are on a similar path to you?

"Um, Elbow maybe," he says, pausing for a moment. "I dunno, it's hard to say, especially as the guy who's doing our press has been telling everyone we sound like **Coldplay AND Travis!"

Er, is that helpful?

"Is it fuck! It's as helpful as cutting your own throat. I'd hope we've got a bit more of a raw edge than Travis or Coldplay and a little more idea about creativity. I think we're a bit more spiky than either probably. It's all a bit forced with them. Whenever they're spiky, it comes across as being schoolboy."

Do you expect to be shoved into their genre by the press?

"Yeah, if our fucking press officer carries on the way he's going," he grins, leaning back into his chair. "He'll have us down as pub rock. But I dunno, they don't really pigeon hole bands like us 'cos there's no real movement and it's just not cool right now to be a band without a skinny fit suit and 3 chord pop/punk songs at your disposal."

So, you've convinced yourself that everything's packed for the tour and you close your front door. Do you have with you anything that's completely and utterly useless that you just can't bear to leave behind?

"No... I don't think so. Just clothes and guitars, that's it really. In fact, I'm taking LOADS of clothes with me, it's awful. My vanity has started shining through recently. To be honest, it's been happening since I started with my girlfriend so I've bought a lot more clothes recently. Anyway," Chant qualifies, "I'll need plenty 'cos there's a photo session set up for during the tour."

Which photogenic part of the British Isles will you be taking advantage of for the shoot?

"We're going to a studio and there are people coming to help style us. Well not 'styled,' exactly."

Surely they won't tart you up that much?

"Fucking right they won't," he laughs. "No chance."

After a show, are you the party large types or will it be cocoa and slippers?

"Oh, it's gonna be a mess. It's gonna be a case of when money and drugs run out, especially if Jamie (Beach, the DJ) has anything to do with it. No, I can't imagine it being a quiet tour. Jamie's got to drive for a lot of it though but that's never stopped him before, unfortunately. We've gone through red lights and have nearly crashed and killed like, about eight people so many times. We've really got to stop him from doing it, it's awful."

Before the album, there's a single out on 3rd November, with a title pinched from Bill Hicks - 'Go Back To Bed America.' With splits in opinion about what the US and UK have been up to this year, are you expecting any comment?

"Yeah, everyone's mentioned it so far. But I don't know how comfortable I am answering, 'cos I'm not sure I'm educated enough to wax lyrical on the subject for any length of time. But I'm glad it's given people something to latch on to otherwise it just going to be Coldplay, Travis..." Chant laughs, rolling his eyes in mock despair.

"It beats that, but it was meant to be more of a universal comment rather than about America per se. It's to do with how people just take what they're fed from leaders and accept it, but the song seems to have grown in stature lately because of the times we're in. Just 'cos Bill Hicks made that particular comment, the song became America but it could just as easily have been about Russians. (Well it probably would have ended up being about Americans actually, but really it could have been about anyone.)

"We've been given all these amazing reasons about why there had to be a war: 'It's definitely not about oil; It's definitely not an excuse to chase after someone from the East (because of how war was created in Afghanistan when really they were after Osama Bin Laden); It's definitely about the fact that Saddam Hussain has got all these missiles.' Then it turns out that it might have been complete bullshit after all although thousands of people have died. That's what the song is about, that we take that crap and don't challenge it as much as we all should."

Yeah, Bush formally ended the war but then bombed and killed Saddam's sons, so was that terrorism?

"Exactly. You might find yourself questioning it at first but after you have seen George Bush on TV so much with his really stern face, even the most cynical person can start to believe it. Then you feel really sick at yourself for even beginning to go along that route. It's quite frightening."

Have things changed at the Small Victories camp since the name change?

"Oh yeah, immensely. We're like a gang now so it's not just me plus a band anymore. I think the second album will be quite co-written too. 'Battle Waltz' is a co-write. It's me and (keyboard player) James Hale and 'Poor Man's Opera' was a four way write."

Who didn't chuck their oar in?

"Milford. He was sat in the next room when it was all being done. He's not particularly interested in writing. He just does what he does."

A band never short of a few Jameses, with four out of the six current members bearing that name, Chant and dual vocalist James Milford have known each other since their first days at school. I'd wanted to meet up with them both this evening to check out the chemistry but Chant runs a tight ship and as I know from previous encounters, he doesn't trust Milford in interviews.

Do you think there's a chance he might have improved?

Uh, this is just between you and me right?

"No, you can print it. We'd end up in prison if Milford did an interview."

In spring 2002, Small Victories took their friends The Darkness out on the road with them as support for a series of shows. I caught up with the mini-tour in a converted church in Cardiff Bay in front of about 30 bemused onlookers. Justin Hawkins, wearing only his legendary but long-retired brown fur kecks, played guitar while perched on his bruv's shoulders as Dan sprinted around the room, almost decapitating the singer at one point as they legged it under a low arched doorway.

I can't believe The Darkness' trajectory. It's incredible isn't it?

"It was insane seeing them in a small place like that," remembers the Small Vix frontman. "And they were supporting us! It's fucking insane. They just caught the public's imagination. Dan's one of my best mates actually."

Didn't he used to PR for you?

"Yeah, they're really cool guys. I see them a lot of the time."

I think Justin is so funny but in a good way.

"He's fucking immense and it's not like they don't mean it. They are a real contradiction and people find it hard to understand them. They are a fucking awesome band."

What's going to be really sad is all The Darkness wannabes that will come in their wake.

"There's gonna be loads of them. They're that kind of band I think."

Didn't you go to a brothel with them once?

Yeah," he says, sparking up. "Like I'm gonna tell you about it!"

And with that, James Chant rushes off for yet another interview.

Chant and his band have been a bright flame in their home city of Cardiff for some time now and with the imminent arrival of 'Holding On Hopefully,' that fire is set to spread.