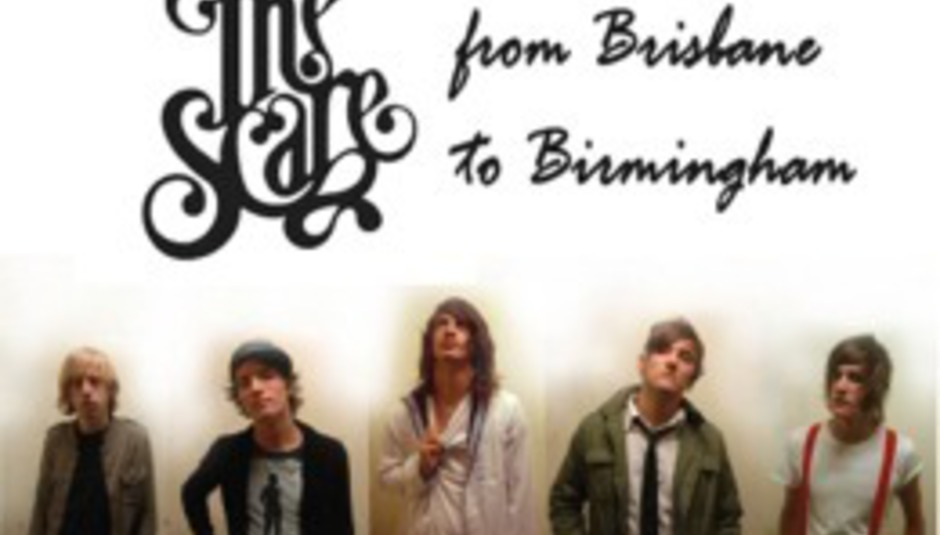 DiS brings you a UK exclusive: an interview with Australian punk rockers, The Scare. Raziq Rauf talks to bassist Wade Keighran about starting a new life on the other side of the world.

Recently relocated from Brisbane to Birmingham, this quintet is all set to make some serious waves across a whole new scene here in England. Indeed, the Aussies have already tried to display their love of partying but Keighran himself fell foul of some over-exuberance early on in their British adventure.

“I was play-fighting with our singer, drunk in some club and he tripped me over. I had a handful of drinks and I was trying to save the drinks instead of breaking my fall! I ended up on the floor and knocked myself out, woke up in hospital and didn’t know where I was.”

The Sydney native broke his shoulder and his collarbone within a fortnight of entering the UK. This band values their booze more than their own safety, something that is well worthy of applause from these quarters.

Keighran is the most recent addition to the band, having initially known the band as drinking buddies - I see a pattern emerging. He joined shortly after the recording of their debut EP, Vacuum Irony – a frantic display of dirty punk rock, reminiscent of The Bronx with the vocals occasionally delving into the realms of former touring buddies The Blood Brothers. The underlying keyboards will not feature in future recordings as the band have streamlined from a sextet to a quintet, with the bassist taking over any keyboard duties should they be required. Keighran doubts he will called into action too often: “The new stuff is hard-out rock anyway. There’s no time or need for keyboards now.” Fair enough.

Despite his junior status Keighran undertakes the majority of the press work, leaving eccentric frontman Kiss Reid to retire gracefully from the limelight. “Kiss doesn’t do interviews,” Keighran explains, “He’s a bloody nightmare but he’s my best friend. I’ll take a fucking knife in the back for him but he’s everything you want in a crazy frontman. Lyrically and vocally I think he’s a genius but he’s just one of those erratic people.”

The Scare, also including guitarists Brock Fitzgerald and Liam O’Brien and drummer Sam P, arrived in London in mid-February and after some teething problems (when they were helped out by an un-named “pimp momma/bedsit holder”) trundled off to the Midlands. Despite being away from the bright lights of the capital, the band are so taken with England that they are already making plans to stay for longer than their six-month visa will allow: “We just wanna stay here forever.”

It appears that the band had pretty much done all they had wanted in their homeland as Keighran explains: “Australia only has five big cities where you can play and have a good time. You can play rural areas a lot but it’s really just not worth your while. With a five-date tour you can only do it so many times a year before you just get really bored.”

Moving to and settling in a foreign place is hard enough, but it seems that cracking a new market is just being treated as a new, refreshing challenge: “We could have stayed in Oz and jumped on a couple more big tours but I wanna take a shot at the world, not just Australia. Over here we can do a lot more. We’ve only played one show since coming over but that was one of the most fun shows we’ve ever had.”

Having opted to leave all their equipment at home to avoid coughing up for ridiculous excess baggage charge, they have recently bought a few instruments to ply their trade with. Actually having instruments is useful when you’re in a band, especially if you have aspirations to tour with Death From Above 1979: “I’d love to play with DFA. I’ve been listening to a lot of their stuff and apparently they like to party as well. I like anyone who just likes to get pissed! We just wanna party and have fun.”

Yes, I think we’ve all gathered that much. The Scare are set to tour more in the very near future and are all set to release the Vacuum Irony EP on Nomadic Records on April 24. I'd recommend it, if only for the ridiculously-titled, xfashioncorex parodying track, ‘If I’m Choking, Make A Scene’. It is as good as the title suggests. Wonderful stuff.